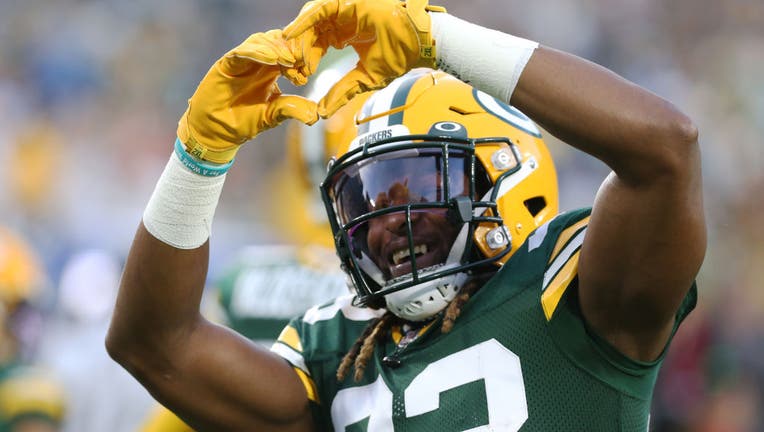 Green Bay Packers running back Aaron Jones before a game between the Green Bay Packers and the Detroit Lions at Lambeau Field on Sept. 20, 2021. (Photo by Larry Radloff/Icon Sportswire via Getty Images)

MILWAUKEE - A "thank you" on two wheels, Green Bay Packers running back Aaron Jones delivered a special gift to a team trainer on Tuesday, Oct. 19.

Jones wore a football-shaped pendant containing his father's ashes earlier in the season, but it fell off during a game at Lambeau Field against the Detroit Lions.

Later, the running back tweeted photos and thanked trainer Bryan "Flea" Engel, who Jones said stayed on the field until 1:45 a.m. searching for it. A few weeks later, Jones gifted Engel with motorized scooters.

"(It's) just a small token of my appreciation for all the hard work he does," Jones said in a video on the Packers' social media. "And just going back out there late at night to find it."

Jones was playing in his first home game at Lambeau Field since the death of his father, Alvin Jones Sr., who died of complications from coronavirus in April., when the pendant fell off. Jones Sr. was 57.

After completing six catches for 48 yards and three touchdowns and 67 rushing yards for another score, Jones said he believes his dad would be "happy" that he lost the sentimental piece in the end zone.

Jones later told FOX6's Lily Zhao that the training staff added a pocket to his uniform so he can continue to have the pendant with him while he plays.

National Bakery & Deli sold an Aaron Rodgers ''I own you'' cookie after his comments during the Green Bay Packers win over the Chicago Bears.