MILWAUKEE - The Milwaukee Brewers have made a few moves this offseason, and one man is at the center of it all as he tries to put his stamp on the organization.

Cruz: "Obviously with the holiday season here, you've been busy. What has it been like being the guy that's now front and center and really in charge of the whole baseball operation of the Brewers so far?"

Arnold: "It's been a lot of fun, honestly. I mean, certainly miss David Stearns like crazy. I still talk to him almost every day, communicate in some fashion with. But every day he's not – he didn't fall off the edge of the earth. He's still around. So he's a big part of what we're doing still. But we have a great group of people who have been around now. I've been here for seven years. We have a really strong group and just lean on them every day for everything, frankly, and it's been a lot of fun so far."

Cruz: "You land William Contreras at catcher. Many think this is a steal for you guys. Why was it so important to bring him into the club?"

Arnold: "We hope so, Brandon. I mean, obviously, you know, he's a guy that we've followed for a long time, and, you know, we've seen his brother a ton here in this division, so we're excited to have him. He's been a guy that we've had our eye on. Once we thought he had a chance to become available, he was a guy that we actively tried to pursue, and we're thrilled to get it done."

Cruz: "You guys are basically about the same size market as San Diego. They're able to make these big moves. When you have critics of you saying, ‘hey, spend more money.’ How do you balance that to make sure you guys are competitive, yet you're not overspending like some teams may be?"

Arnold: "I think we want to be responsible. I also think at the same time, we have support from our ownership group to access players that we want to try to get. And so, you know, it's a balance, right? We are the Milwaukee Brewers. We understand that we're the smallest market in the league, but I know that we have support from our ownership to actively pursue players we want to try to access. And so we're going to continue to do so, and sometimes that comes through trades like William Contreras. It's not always just about spending dollars: It's about spending dollars responsibly." 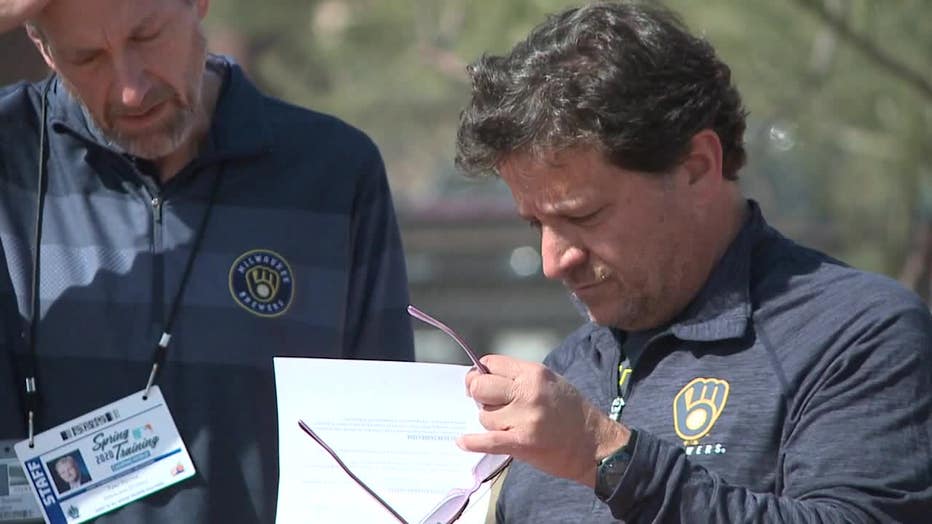 Cruz: "You guys sent Kolten Wong to Seattle. You bring Jesse Winker out here. What are you hoping to see out of him?"

Cruz: "There are some reports out of Seattle questioning his work ethic and his presence in the clubhouse. How do you go through the process of vetting a guy to make sure he will be a fit for your clubhouse and put in the effort that you guys are expecting?"

Arnold: "Every situation is different, and we try to do our homework on everybody to the extent that we can, and having a long history with Jesse in our division, we've gotten to know him. You know, I've spent time around him, around the batting cage in Cincinnati. Our coaches know him. We have people on our team that know him. Whatever happened in Seattle, you know, that's in the past for him. We're hoping it's a really good fit for us because we have a lot of people here that are big supporters of him. When I spoke to him, he was thrilled to be a Brewer and that made us happy as well."

Arnold also discussed the acquisition of infielder Owen Miller – a Mequon native. He said there are still free agents available and trades that can be made to make the team better. He also likes their foundation and believes their core can be dangerous in the postseason.