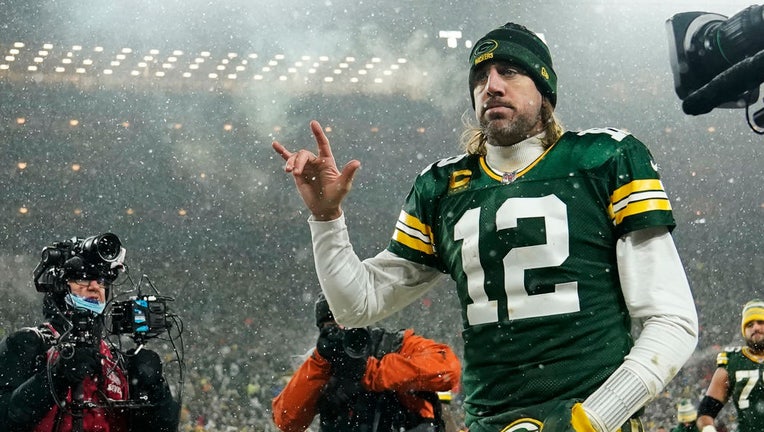 GREEN BAY, WISCONSIN - JANUARY 22: Quarterback Aaron Rodgers #12 of the Green Bay Packers gestures as he exits the field after losing the NFC Divisional Playoff game to the San Francisco 49ers at Lambeau Field on January 22, 2022 in Green Bay, Wiscon

GREEN BAY, Wis. - Aaron Rodgers says he doesn’t want to be part of a rebuilding project. Apparently, neither does his current coach.

"There’s no plan for a rebuild," Packers coach Matt LaFleur said Monday, two days after the Packers’ season ended with a 13-10 loss to the San Francisco 49ers. "You get this close, obviously win a lot of football games, and we know in order for there not to be that, he’s got to be a part of this thing. I don’t think that’s anybody’s intention."

The Packers are about $40 million over the salary cap according to overthecap.com and have plenty of players whose contracts are expiring, including two-time All-Pro receiver Davante Adams.

That could impact whether the 38-year-old Rodgers is back in Green Bay, where the 2005 first-round pick has spent his entire career. Rodgers said after the 49ers game that he doesn't want to be part of a rebuild.

"There’s obviously a lot of decisions to be made," the quarterback said. "There’s a lot of players whose futures are up in the air, so definitely it’ll be interesting to see which way some of those decisions go. But I’ll have some conversations with (general manager) Brian (Gutekunst) in the next week or so and get a little bit more clarity and think about my own future and how much longer I want to keep doing this."

Rodgers earned All-Pro honors and is a leading contender for his fourth MVP award, and second in a row. But his postseason results haven’t matched his extraordinary regular-season performances. Rodgers led Green Bay to a Super Bowl title in the 2010 season, but the Packers have gone just 7-9 in his 16 playoff starts since.

Even so, the Packers clearly want him to return.

"This guy has done so much for such a long period of time for this organization, for this city, for this team," LaFleur said. "And so, I want to be respectful of his process. Whatever he needs to go through to make the best decision for himself, and certainly we would love for him to be a Packer and be a Packer to the day he decides to retire."

While he acknowledged the organization has some difficult choices ahead, LaFleur expressed confidence the Packers will have a roster capable of winning a title.

"There’s ways to move money and to make sure that we get the bulk of our key contributors back," LaFleur said. "Are there absolutely going to be some tough decisions? No doubt about it. But I’m really confident in Russ’ ability and Gutey’s ability and us collectively to figure out a way to do this thing."

Rodgers said after Saturday’s game he would try to make a decision before the start of free agency and hasn’t ruled out retirement, as well as requesting a trade or returning to Green Bay. Rodgers’ situation remained unclear heading into this season until he reported for training camp.

"I’m hopeful that it doesn’t drag on quite as long," LaFleur said. "And we’ll make the necessary decisions once we kind of find out where he’s at."

Matt LaFleur wants Rodgers to return to Green Bay: 'We'd be crazy not to want him back here'

Another season, another disappointing end for Aaron Rodgers and the Green Bay Packers.

LaFleur said he will promote from within if offensive coordinator Nathaniel Hackett gets a head coaching job. He wouldn’t speculate on any other staff changes in the wake of this earlier than expected playoff exit.

"We’ve got to look at everything," LaFleur said. "And if we feel like we can improve in certain areas then we’ll make tough decisions. But we’re not even close to, remotely close to, getting into that at this point in time."

LaFleur acknowledged the need to look at ways to improve the Packers’ special teams. LaFleur fired special teams coordinator Shawn Mennenga after the 2020 season and promoted Maurice Drayton, but the unit got even worse this season and reached a nadir in the playoff loss.

The Packers had a field-goal attempt and a punt blocked. The field goal would have put the Packers ahead 10-0 at halftime. The 49ers scored a tying touchdown on the blocked punt with 4:41 remaining.

"We can do a much better job, starting with myself, emphasizing the special teams, allowing some of maybe our starters to play on more phases of that," LaFleur said.

Green Bay Packers quarterback Aaron Rodgers heads into another offseason of uncertainty after one more frustrating finish to a brilliant year.

The Packers discovered one of the drawbacks of playing regulars on special teams Saturday when running back A.J. Dillon fractured a rib during a pile-up while he was blocking on a kickoff return. The injury sidelined him for most of the second half

Dillon said he likely wouldn’t have been available if the Packers had reached the NFC championship game, but figured he would have been able to return in time for the Super Bowl.

Center Josh Myers said the injury that caused him to miss 10 games was a torn medial collateral ligament and a tibial plateau fracture. He returned for the regular-season finale and played Saturday.

"I’ve still got some unfinished business, I feel like, to handle," Douglas said. "Of course, I want to be here. But I don’t think that’s all my decision to make."