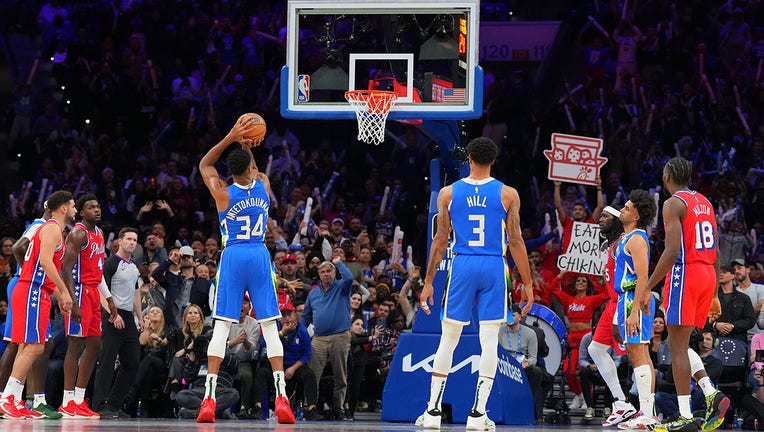 PHILADELPHIA - Milwaukee Bucks star Giannis Antetokounmpo argued with an arena worker and flung a ladder away from a basket, sending it toppling over as he tried to shoot practice free throws after a 110-102 loss to Philadelphia on Friday night, Nov. 18.

After going 4 for 15 from the line, Antetokounmpo returned to the Wells Fargo Center floor several minutes after the game to shoot free throws with a small number of fans still in the building.

Antetokounmpo proceeded to miss his first five foul shots in the postgame practice. During a break in the two-time NBA MVP's shooting, arena workers moved onto the court for their usual postgame activities.

The employee moved it back in place. Antetokounmpo then approached the staffer, had a quick, exchange, and then shoved the ladder away, sending it crashing to the floor.

"I never try to disrespect anyone, in any way shape or form," Antetokounmpo told reporters afterward. "I feel like today was just unfortunate event that took place."

Antetokounmpo told reporters that the incident began when he started shooting free throws and a player and coach told him to leave the court. Antetokounmpo said he left to get two more balls and returned to see the ladder in front of the basket.

"At the end of the day people are going to make things look the way they want it to look," Antetokounmpo told reporters. "Did I meant to push the ladder all the way down? I totally did not. I just tried to, I think I pushed it and it got caught and fell. But people are going to make it look the way they want it to look. I know what happened. I think there’s cameras all over this court. We can show the whole incident from people coming and getting the ball, people getting in my face. I don’t want to get into all those things.

"I don’t know if I should apologize because I don’t feel like I did anything wrong, except the ladder just fell. I feel like it’s my right for me to work on my skills after a horrible night from the free-throw line. I think anybody in my position that had a night like me would go out and work on his free throws. And if they didn’t, they don’t really care about their game."

Word spread quickly through the Wells Fargo Center. Philadelphia's Montrezl Harrell, who was still on the other end of the court talking to a group of individuals, including some 76ers staffers, started to walk toward Antetokounmpo, shouting at him for mistreating the arena employee.

Harrell never made it past half court, as team employees were able to get him to turn around and head to the Philadelphia locker room.

"Aye make sure you get the complete story," Harrell tweeted afterward. "I ask the man can he get off the court so I can workout they had to change the court over he ignore me so hey that’s what you get! Respect is respect! GOODNIGHT!