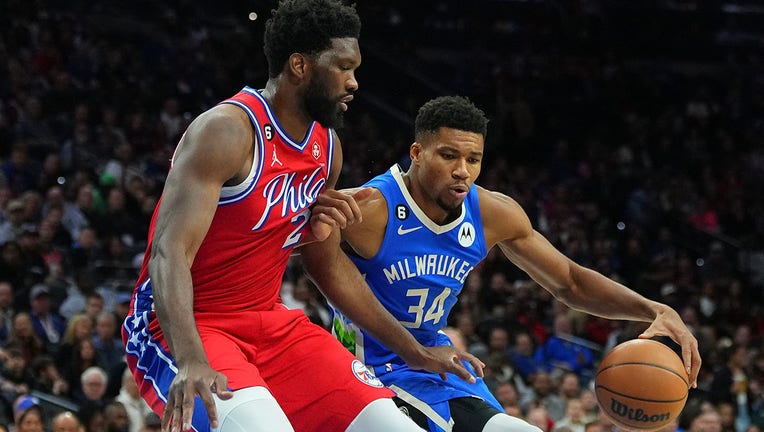 Giannis Antetokounmpo drives to the basket against Joel Embiid of the Philadelphia 76ers on Nov. 18. (Photo by Mitchell Leff/Getty Images)

PHILADELPHIA - Joel Embiid had 32 points, 11 rebounds and eight assists and the short-handed Philadelphia 76ers overcame a 13-point deficit to beat the Milwaukee Bucks 110-102 on Friday night.

Embiid, who averaged 40 points and 11 rebounds in his previous four games, had 19 points, eight rebounds and five assists in the second half after 76ers star guard Tyrese Maxey left just before halftime with a left foot injury.

Maxey had 24 points, five assists and four rebounds before rolling his ankle while driving to the basket against Jevon Carter. Philadelphia said he will have an MRI Saturday.

Giannis Antetokounmpo led the Bucks with 25 points and 14 rebounds, however, his struggles from the free-throw line — he went 4 of 15 — were amplified with each attempt in the second half by a raucous Philadelphia crowd.

Already without starters James Harden and Tobias Harris, once Maxey went out Philadelphia stepped up the defensive effort, especially in the third quarter when it outscored Milwaukee 34-22.

Georges Niang added 17 points for Philadelphia, and Shake Milton had 15.

76ers: A little more than two weeks since suffering a right foot tendon strain that is expected to keep him out of action for a month, Harden said he believes he’s on track to return on time. Harden began taking shots at practice Thursday. ... F Tobias Harris missed Friday’s game with what the team called left hip soreness. Danuel House Jr. started in his place.

Bucks: Both G Grayson Allen and G Jrue Holliday returned to the lineup after missing time with right ankle sprains.