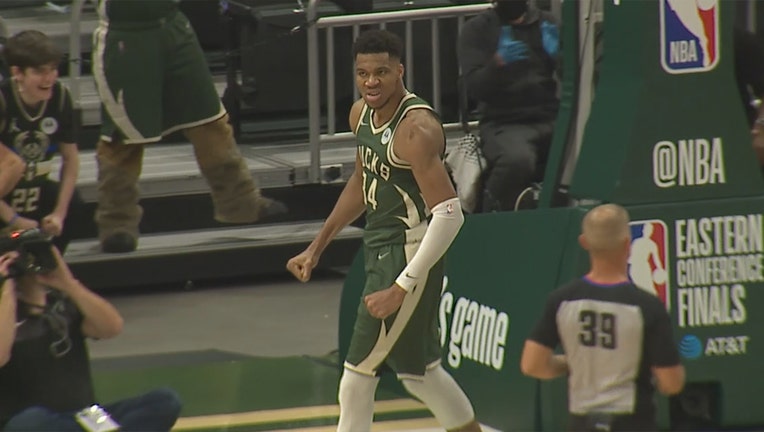 Giannis Antetokounmpo mean-mugs the crowd after making a shot against the Hawks in Game 1 of the Eastern Conference Finals.

MILWAUKEE - The Milwaukee Bucks will likely be without star Giannis Antetokounmpo for Wednesday night's home game against the Indiana Pacers. He has entered the NBA's health and safety protocols.

According to a report from ESPN's Adrian Wojnarowski, teammate Wesley Matthews Jr. – who recently rejoined the team as a free agent – is also in the league's protocols.

The Bucks were already expected to be short-handed against Indiana. As of Tuesday morning, Khris Middleton remains day-to-day; he left Monday night's loss to the Boston Celtics with a hyperextended left knee in the third quarter. George Hill was also ruled out for the game.

According to NBA.com, the league is on the brink of new COVID-19 guidelines for players and staff as the coronavirus disrupts multiple teams.

The Green Bay Packers donated $270,650 to the United for Waukesha Community Fund to benefit the victims of the parade attack and their families.

The Milwaukee Brewers have now opened applications for both the Brew Crew and national anthem performers.