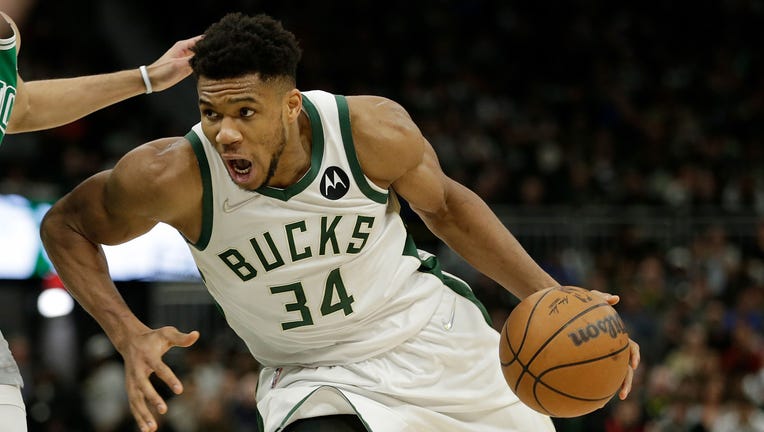 Giannis Antetokounmpo of the Milwaukee Bucks drives to the basket. (Photo by John Fisher/Getty Images)

MILWAUKEE - Milwaukee Bucks star Giannis Antetokounmpo has been named to the 2021-22 All-NBA First Team, the league announced Tuesday, May 24.

With his six All-NBA selections, Antetokounmpo passes Kareem Abdul-Jabbar and Sidney Moncrief for the most in Bucks history, while his four First Team selections now tie Abdul-Jabbar for most in franchise history.

In his ninth NBA season, Antetokounmpo averaged a career-high 29.9 points per game, which ranked second in the league and was the highest scoring season by a Buck since Abdul-Jabbar averaged 30.0 ppg in 1974-75.

During the 2021-22 season, Antetokounmpo became the Bucks' all-time leader in scoring, passing Abdul-Jabbar for first place in a win over the Brooklyn Nets on March 31, and the franchise leader in blocks, surpassing Alton Lister in a win over the Houston Rockets on Dec. 10.

In addition to earning First Team honors each of the past four seasons, Antetokounmpo was also named to the All-NBA Second Team following both the 2016-17 and 2017-18 seasons. His six consecutive selections are the second-longest active streak in the NBA behind only LeBron James’ streak of 18 consecutive selections.

Antetokounmpo is joined on the 2021-22 All-NBA First Team by:

Voters selected two guards, two forwards and one center for each team, choosing players at the position they play regularly. Players who received votes at multiple positions were slotted at the position at which they received the most voting points.