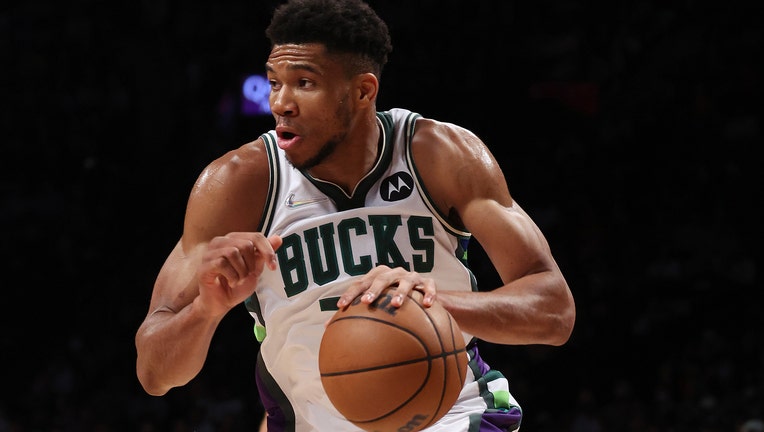 NEW YORK, NEW YORK - MARCH 31: Giannis Antetokounmpo #34 of the Milwaukee Bucks drives against the Brooklyn Nets during their game at Barclays Center on March 31, 2022 in New York City. NOTE TO USER: User expressly acknowledges and agrees that, by do

Entering Thursday night’s game against the Brooklyn Nets at Barclays Center with 14,172 career points, Antetokounmpo needed 40 points to pass Abdul-Jabbar (14,211) for first place on the franchise’s all-time scoring list and did so with his 3-point make at the 18-second mark of the fourth quarter, giving him 42 points on the night.

In his ninth season with the Bucks, Antetokounmpo is now the franchise’s all-time leader in points, blocks and triple-doubles. He also entered tonight’s game second in Bucks history in field goals made, second in free throws made, seventh in threes made, second in rebounds, second in assists and fifth in steals.

An NBA Champion, two-time MVP, the reigning Finals MVP, five-time All-NBA selection, six-time All-Star, Defensive Player of the Year, Most Improved Player award winner and member of the NBA 75th Anniversary Team, the 27-year-old Antetokounmpo has appeared in 652 games (587 starts) throughout his NBA career with the Bucks after being selected by the team with the 15th overall pick in the 2013 NBA Draft.