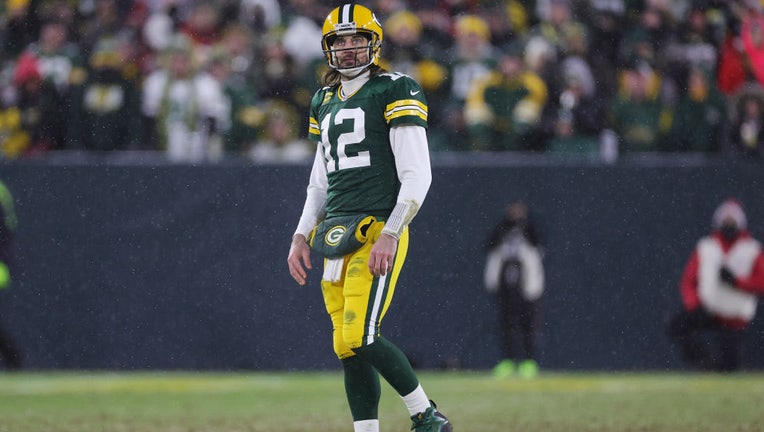 GREEN BAY, WISCONSIN - JANUARY 22: Aaron Rodgers #12 of the Green Bay Packers looks on during the game against the San Francisco 49ers during the NFC Divisional Playoff game at Lambeau Field on January 22, 2022 in Green Bay, Wisconsin. (Photo by Stac

Rodgers has said he hasn’t decided whether to return to the Packers, pursue a trade or retire. The three-time MVP went into more details about his future Tuesday on "The Pat McAfee Show" on YouTube and SiriusXM.

"One thing I would not do, 100% not do, is retire and then come back a year later," Rodgers said. "I don’t have any desire to do that. That makes no sense."

Rodgers earned All-Pro honors this season and played his way into contention for a fourth MVP award this season, though he struggled Saturday in a 13-10 NFC divisional playoff loss to the San Francisco 49ers.

The 38-year-old Rodgers said after that game he would try to decide on his future before the free agency period begins in March. All-Pro receiver Davante Adams heads a long list of Packers with expiring contracts.

"I think that should be enough time to make a decision, by then," Rodgers said. "I don’t want to put myself on a specific date, but again, I do want to be sensitive to Davante and many other guys who have decisions to make on their own futures. To drag it out past free agency would be disrespectful to the organization and to those guys, and that 100% will not happen."

Packers coach Matt LaFleur said Monday that "we would love for (Rodgers) to be a Packer and be a Packer to the day he decides to retire." LaFleur said general manager Brian Gutekunst, executive vice president/director of football operations Russ Ball and president/CEO Mark Murphy share that opinion.

"We’re all on the same page there," LaFleur said. "There’s no debate."

Rodgers skipped the Packers’ offseason team activities and mandatory minicamp last year. He reported on time for training camp but said he wanted to have a voice in the team’s decision-making process, and believed the organization didn’t treat departing high-character veterans with enough respect.

Since then, Rodgers has praised Gutekunst on multiple occasions and said his relationship with the general manager has improved.

"There’s not going to be any weird standoff, war of silence or anything," Rodgers said. "Brian and I have had good conversations throughout the year. When it comes time to make a decision, we’ll have a conversation and that will be that. It won’t be a long, drawn-out process. I think that’s what’s best for me, for him, for the organization and for all the other decisions that need to be made."

Packers' pitch to Aaron Rodgers: 'There's no plans for a rebuild'

Aaron Rodgers says he doesn’t want to be part of a rebuilding project. Apparently, neither does his current coach.

Matt LaFleur wants Rodgers to return to Green Bay: 'We'd be crazy not to want him back here'

Another season, another disappointing end for Aaron Rodgers and the Green Bay Packers.

Kohl’s confirmed that it has been approached about a possible sale of the department store chain, sending shares up more than 30% in early trading Monday.