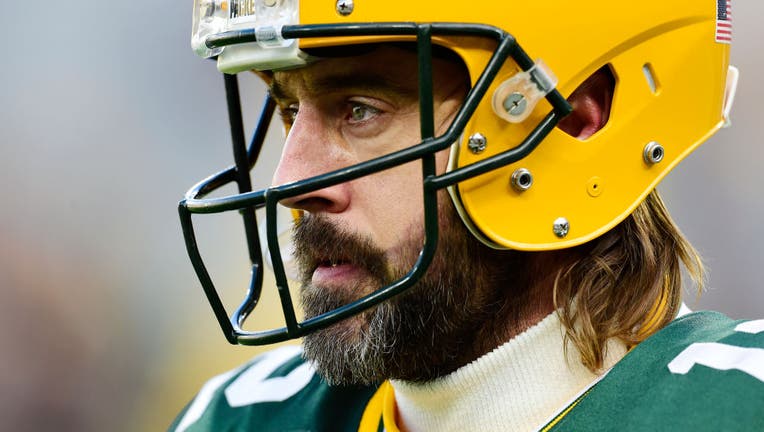 GREEN BAY, WISCONSIN - NOVEMBER 28: Aaron Rodgers #12 of the Green Bay Packers looks on during pregame warm-ups before the game against the Los Angeles Rams at Lambeau Field on November 28, 2021 in Green Bay, Wisconsin. (Photo by Patrick McDermott/Ge

GREEN BAY, Wis. - Green Bay Packers quarterback Aaron Rodgers doesn’t know for sure who's been leaking his medical information but he has an idea of who might be behind it.

During his weekly Tuesday appearance on "The Pat McAfee Show," Rodgers was asked about his broken toe and if surgery was still on the table after there were conflicting reports this week about what route he would be taking.

"Look, again, with these reports, I don’t know where they’re coming from. I don’t know who’s talking. It seems like there’s certain coaches that may have friends in the media that they don’t realize are actually just trying to report things."

Rodgers didn’t seem too surprised by his own admission, telling former Packers linebackers A.J. Hawk: "you’ve known about that for a while, AJ, guys who had their people that they would leak stuff too."

The reigning NFL MVP’s comments come just days after it was reported that he was suffering from COVID toe and not a broken toe after he jokingly said during last week’s episode "No lingering effects other than the Covid toe."

"Pretty obvious when I’m joking and when I’m serious," Rodgers said Tuesday of his previous comments. "I clearly stated and it was posted on there that this is worst than turf toe so it's obviously a bone issue."

Rodgers got creative in shutting down the rumors during a press conference with reporters on Thursday, raising his foot on camera to show – no COVID toe.

"I can’t believe I have to again come on here and talk about my medical information but yea I have a fractured toe," he said. "I never heard of COVID toe before. I have no lesions on my feet. That’s just a classic case of disinformation."

Rodgers admitted on Tuesday that his COVID toe remark was in response to McAfee’s joke – both admitting they had no idea what the condition was until the report was published.

The veteran quarterback has not ruled out the possibility of surgery to repair his broken toe but said the goal is to avoid it if possible.

"The surgery would immobilize the toe, and so then that would be an issue the entire season I’d be dealing with. It would avoid any further displacement, but it would immobilize the toe. So we’re hoping that with a couple weeks here we can get enough healing that maybe I can avoid doing that. We’ll reassess, like I said, probably later this week and early next week, with the ultimate goal of not having to do surgery, if this thing heals up a bit better and I make it through a few more weeks, and it doesn’t bother me for the rest of the season."

Shank Hall doesn't require proof of vaccination, but the owner says a shot may be the way to turn things around. In downtown Milwaukee, the Pabst Theater Group was one of the first entertainment venues to establish vaccine requirements.

A clinical psychologist says what happened in Waukesha is called a collective traumatic event and says the COVID pandemic has proven communities are resilient.

COVID-19 forced many businesses to shut down. Some reopened and are back to business as usual. But the virus is now impacting a West Bend restaurant in a different way.