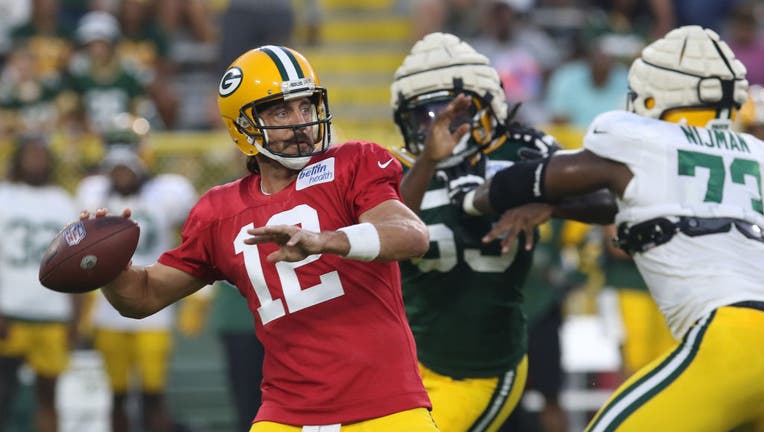 GREEN BAY, Wis. - Aaron Rodgers didn’t appear to like a sarcastic question about the coronavirus in a recent podcast interview as he gets set for the start of the 2022 season.

The Green Bay Packers star appeared on Monday’s episode of Barstool Sports’ "Pardon My Take" on Monday. Dan Katz, known as "Big Cat," and Eric Sollenberger, known as "PFT Commenter," appeared to be joking around with Rodgers about his decision to not get vaccinated against COVID-19.

Rodgers and the podcast duo took turns poking fun at each other over the two-time reigning NFL MVP’s new tattoo and Katz’s hope that Rodgers would retire to give his Chicago Bears a break.

Sollenberger asked Rodgers about how the quarterback’s image and how he would describe himself.

"I think in general, I’d like to present myself how I see myself. So unapologetically authentic, you know?" Rodgers said." You like me or don’t like me — that’s not my concern at this point. You know, my concern is just speaking the truth, and, you know, people say, ‘Oh, immunization, vaccination!’"

Katz agreed that he was the one who said that a lot.

Katz and Sollenberger then poked fun at Rodgers’ decision to avoid the vaccine.

"How many people do you think you killed? What’s your count?" Sollenberger asked sarcastically, while Katz added, "How many grandmothers? Let’s just do grandmothers."

Rodgers smiled briefly after Sollenberger’s question, but had a serious response.

Katz explained the response he would get when he would tweet that Rodgers "should be in jail" after Rodgers said he was "immunized" but didn’t explain if that meant he took the COVID vaccine.

Rodgers, Sollenberger and Katz moved on to straight football questions after the moment.

Rodgers missed one game last season after contracting COVID-19. He said in the 2021 offseason he was immunized but never explained he didn’t get the vaccine. While his thoughts and feelings on the vaccine were a storyline during the course of the season, he led the Packers to the playoffs and won his fourth MVP.