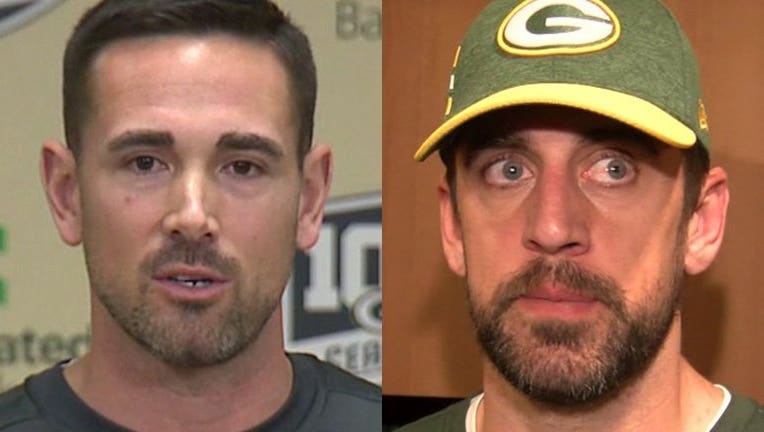 GREEN BAY, Wis. (AP) - Green Bay Packers coach Matt LaFleur reiterated his hope that he’d get to continue working with Aaron Rodgers this season while offering no news on the quarterback’s status.

"I’ve got nothing new to update, and we still obviously feel the same way," LaFleur said Friday after the opening workout of the Packers’ rookie minicamp.

"We want him back in the worst way. I know he knows that and, you know, we’ll continue to work at it each and every day."

After ESPN reported just before the draft that Rodgers doesn’t want to return to Green Bay, Packers CEO Mark Murphy posted a column on the team’s website in which he said "this is an issue that we’ve been working on for several months." Murphy acknowledged that he, Gutekunst and coach Matt LaFleur had met with Rodgers "on a number of occasions" during the offseason.

Gutekunst has indicated he doesn't plan to trade Rodgers, who has three years remaining on his contract. LaFleur said after the draft that he "can’t fathom" Rodgers not being in Green Bay.

The Packers addressed their quarterback depth Thursday by signing Blake Bortles, the No. 3 overall pick in the 2014 draft.

Packers offensive coordinator Nathaniel Hackett held the same position with Jacksonville during Bortles’ tenure as the Jaguars’ starting quarterback. Bortles spent the 2019 season and portions of 2020 with the Los Angeles Rams, who run a similar offense to Green Bay.

Until the Packers signed Bortles, the only quarterbacks on their roster were Rodgers and 2020 first-round draft pick Jordan Love. Tim Boyle, who backed up Rodgers last season, has since joined the Detroit Lions.

"You’re always going to have three if not four guys typically in an offseason program and in training camp," LaFleur said. "(We liked) Blake’s familiarity with Hackett, with being in the Rams’ offense, with a lot of carryover in terminology and just his overall experience in this league. I mean this is a guy that started a lot of games and has had a lot of success."

Kelly appeared in one game in 2018 for the Denver Broncos, who selected him out of Mississippi with the final pick in the 2017 draft. Benkert signed with the Atlanta Falcons as an undrafted free agent out of Virginia in 2018 but hasn’t played in an NFL game.

LaFleur was asked whether he’d have to go into offseason workouts preparing Love for the possibility of being the starter just in case the Rodgers' situation doesn’t get rectified. Love didn’t play a single down during his rookie year as the Packers went 13-3 and lost in the NFC championship game for a second straight season.

"I’m not going to make any assumptions about anything at this point," LaFleur said. "We’re just going to take it day by day. But I think every player on our roster has got to have the mentality that they’re going to be the guy. If not, when you do get your opportunity, you will not be prepared for it. So that is always what we stress to every player on this football team.

"In football, unfortunately there’s some uncontrolled circumstances that can happen, and you might be one play away from getting your opportunity. And in this league, you might only get one opportunity, so you better prepared for that."

Aaron Jones on Rodgers rift: 'I hope he's our quarterback'

Packers running back Aaron Jones joined The Rich Eisen Show on Thursday to discuss the rift between the team and Aaron Rodgers.

The Packers and the NFL released the 2021 regular season schedule on Wednesday night.