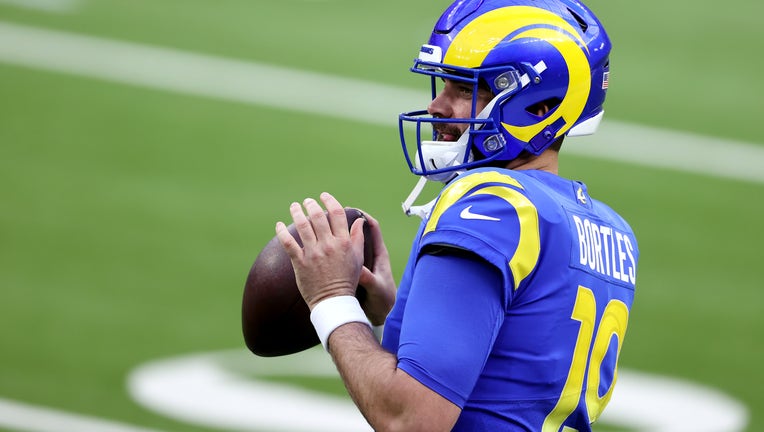 INGLEWOOD, CALIFORNIA - JANUARY 03: Blake Bortles #19 of the Los Angeles Rams warms up before the game against the Arizona Cardinals at SoFi Stadium on January 03, 2021 in Inglewood, California. (Photo by Sean M. Haffey/Getty Images)

Bortles, a 6-foot-5, 236-pound seventh-year player, was originally selected by the Jacksonville Jaguars in the first round (No. 3 overall) of the 2014 NFL Draft out of the University of Central Florida. After five seasons with the Jaguars (2014-18), he spent the 2019 season with the Los Angeles Rams and in 2020 he spent some time on the active roster and practice squad of the Denver Broncos before re-joining the Rams prior to Week 17. Bortles is one of four players (Russell Wilson, Cam Newton, Jeff Garcia) in NFL history to throw for at least 15,000 yards and rush for at least 1,500 yards in their first five NFL seasons. He ranks No. 2 in Jaguars history in career passing yards (17,646), pass attempts (2,632), pass completions (1,561) and passing touchdowns (103), and was the first player in team history to have multiple games with four-plus passing touchdowns (five games).