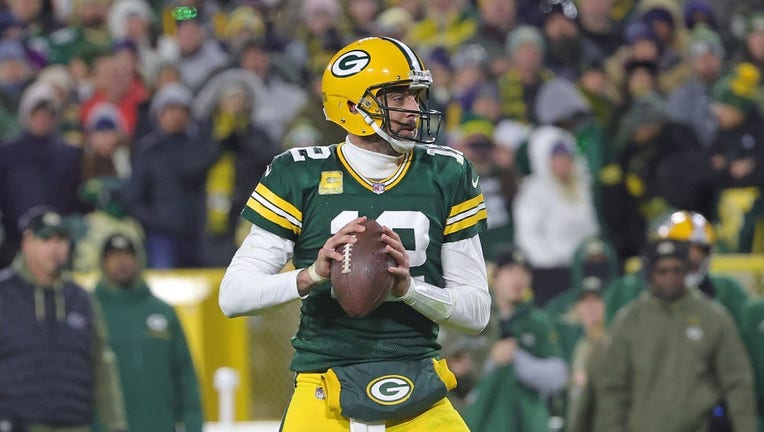 Aaron Rodgers #12 of the Green Bay Packers looks to pass during a game against the Dallas Cowboys at Lambeau Field on November 13, 2022 in Green Bay, Wisconsin. The Packers defeated the Cowboys 31-28 in overtime. (Photo by Stacy Revere/Getty Images)

GREEN BAY, Wis. - The Green Bay Packers beat the Cowboys in overtime at Lambeau Field Sunday, but cameras caught Aaron Rodgers yelling at his coach on the sidelines late in the game.

Rodgers admitted he was frustrated with coach Matt LaFleur's play calling down the stretch.

The reigning NFL MVP was happy the Packers won, but he may have felt a different offensive approach could have won the game in regulation.

LaFluer opted for a running play on first and second down with less than two minutes remaining in the game.

Green Bay was then forced to punt after an incomplete pass on third down. The offensive series didn't sit well with Rodgers

He gave the fourth-year coach an earful when he reached the sidelines. After the game, Rodgers admitted his strong words stemmed from frustration with LaFleur's play calling.

"Just every single play call, probably," Rodgers said via a postgame transcript from the team. "I felt like we were like 30 yards from ending the game in regulation and also felt like it was two minutes, so I was going to be calling those, and I was in a pretty good rhythm. Obviously, I didn’t have a ton of attempts but felt like I was in a pretty good rhythm. I felt like I threw the ball just about exactly where I wanted to, so I wanted a chance to go win the game."

After the Packers lost the overtime coin toss, the defense was able to stop the Cowboys from converting on a fourth down.

Rodgers and the Packers offense got the ball and moved into field goal range. Kicker Mason Crosby won the game with a 28-yard field goal.

For his part, LaFleur pointed the finger at himself but noted that it was more important that the team won the game.

"It didn’t work out, at least in that moment, but it did work out obviously for us to be able to come out on top," LaFleur said. "A lot of times when we get in those situations, we give Aaron a ton of freedom to kind of run the show. I’d say, typically, he does such a great job with it. So, hindsight is 20/20, but that was on me, totally."

The loss ended a long streak for the Dallas Cowboys.

Entering the contest, the Cowboys were 195-0 when leading by 14 points after three quarters. Dallas was up 28-14 in the game's final quarter on Sunday.