MIAMI BEACH, Fla. - A gunman fatally shot a tourist eating dinner with his family at a Miami Beach restaurant as the man protected his 1-year-old son, police and a family member said.

Tamarius Blair David Jr., 22, of Norcross, Georgia, told investigators he shot Dustin Wakefield, 21, on Tuesday night because he "was high on mushrooms, which made him feel empowered," according to his arrest report.

David allegedly told police he entered La Cerveceria restaurant just before 6:30 p.m. and randomly decided to shoot Wakefield, who was on vacation from Castlerock, Colorado. 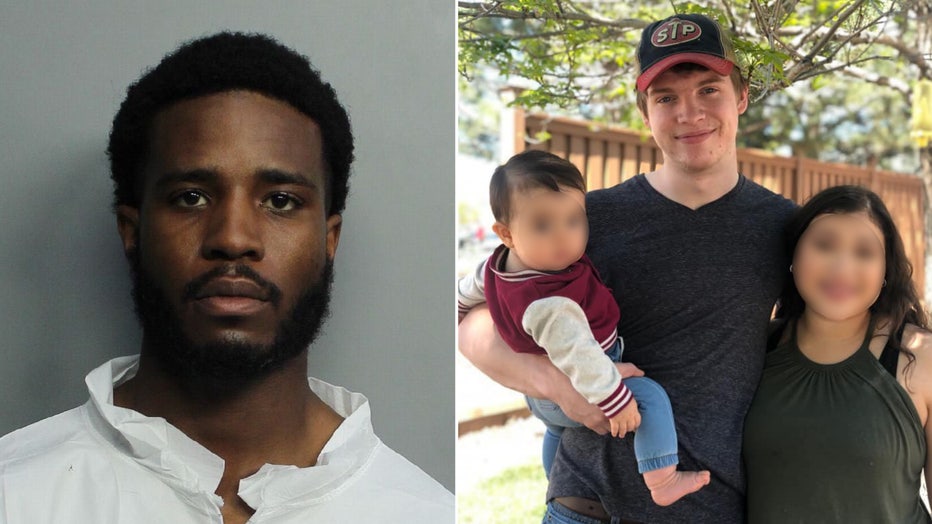 "This guy came in with a gun, waving it, saying it’s time to die. He pointed the gun at his son and Dustin said, ‘He’s only a boy,’" Mike Wakefield told the Miami Herald. He was not in South Beach but heard the account from his family. "Dustin stood up between the gunman and the baby and he shot him. He shot him multiple times on the ground."

He said of his nephew, who worked in construction, "He was the kindest kid. He loved his family. He loved being a dad."

WSVN reports that, moments after the shooting, cellphone video captured David dancing on the restaurant’s patio.

"He started dancing on top of the guy," a witness told the news outlet. "I don’t know why."

A second witness said, "What was so strange is the guy that was shooting, they said he was smiling and laughing the whole time that he was shooting the guy."

David ran from the restaurant and was captured as he ran down an alley. Cellphone video obtained by WSVN shows David lying spread-eagle on his back and smiling as three officers approach with their guns pointed towards him yelling commands, warning him that if he touches his gun he will be shot.

David is charged with murder and was being held without bond Wednesday at the Miami-Dade County Jail. Jail records do not indicate if he has an attorney.