Dramatic video posted to Instagram shows Sunday morning’s deadly shootout. The disturbing clips were recorded outside Set Nightclub in downtown Houston. A group of people can be seen fighting before several gunshots are fired.

HOUSTON - One woman is dead and three Harris County Sheriff’s Office deputies are recovering following an early Sunday morning shooting in the parking lot of a Midtown Houston nightclub.

The Houston Police Department said Joseph Anthony Gonzalez, 25, is charged with three counts of aggravated assault against a public servant and with being a felon in possession of a weapon.

According to court documents, the suspect is accused of injuring three deputies and fatally shooting his mother. The court documents state that authorities are still completing their investigation of the mother’s death. 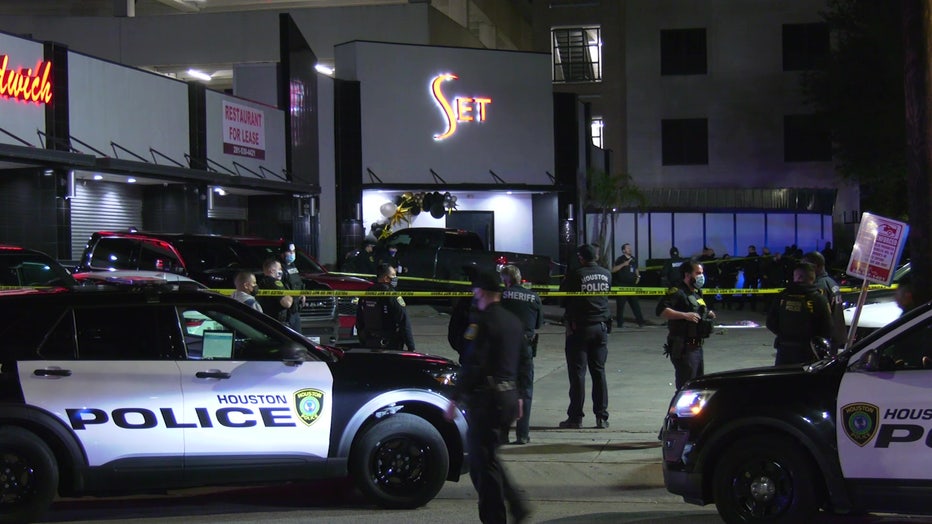 Dramatic video posted to Instagram shows Sunday morning’s deadly shootout. A group of people can be seen fighting before several gunshots are fired.

Authorities said the shooting occurred around 2:20 a.m. at Set Nightclub, located on the 2900 block of Travis Street.

According to HPD, three deputies were working an extra job at the nightclub when they were directed outside to the parking lot where a disturbance was taking place.

Upon going to investigate, authorities say the deputies heard numerous gunshots and were confronted by a suspect armed with a handgun.

Police say the suspect opened fire and shot all three deputies. One deputy simultaneously fired back at the suspect, striking him, according to police.

Authorities say the suspect then ran to a red Ford pickup truck and fled the scene.

A woman who was struck in the leg was taken to the hospital, where she was pronounced deceased.

Two of the deputies were taken to Memorial Hermann while the other deputy was taken to Ben Taub Hospital.

Harris County Sheriff Ed Gonzalez said one deputy has been with the sheriff’s office for about five years, while the other two deputies had about 11 years of service. We’re told that all deputies are expected to survive.

Around 3:45 a.m., a man, later identified as Gonzalez, drove himself to a Sugar Land hospital. Police say the man and the truck he was driving matched the suspect and vehicle descriptions on the shooting scene.

Gonzalez was eventually transferred to a Houston hospital and subsequently charged. Police say he remains hospitalized.

Anyone with additional information is urged to contact the HPD Special Investigations Unit at 713-308-3600.