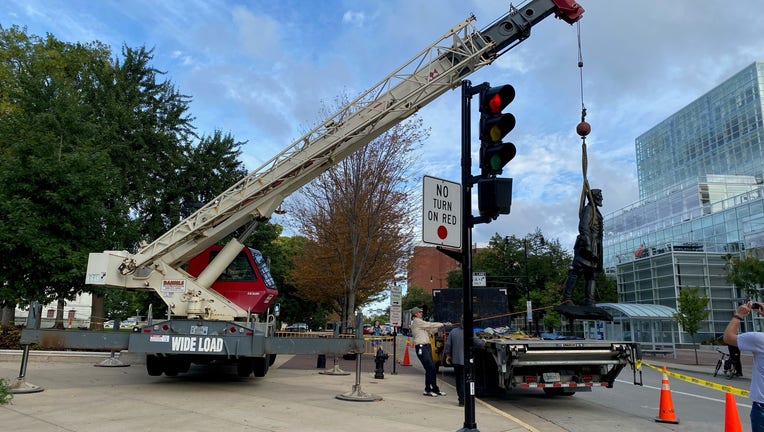 Crews work to restore the "Forward" statue and the one of Col. Hans Christian Heg, which were torn down by protesters last year, on Sept. 21, 2021. (WMTV/Erin Sullivan)

MADISON, Wis. - Wisconsin workers reinstalled two statues Tuesday on the state Capitol grounds that protesters ripped down during a demonstration last year in the wake of George Floyd's death.

Workers reinstalled a 9-foot-6-inch statue of Wisconsin abolitionist Col. Hans Christian Heg as well as a 7-foot statue of a woman symbolizing the state's "Forward" motto. Neither statue has any racist history associated with them, but protesters said they represented a false narrative that Wisconsin supports Black people and racial equity.

Protesters toppled both statues in June 2020, breaking off Heg's leg and head. The Forward statue was dented and one of its fingers broken off.

The demonstration was among several that shook downtown Madison in the days after Floyd's death in Minneapolis on May 25, 2020. Floyd, who was Black and handcuffed, died after white police Officer Derek Chauvin pressed his knee into Floyd's neck for several minutes. 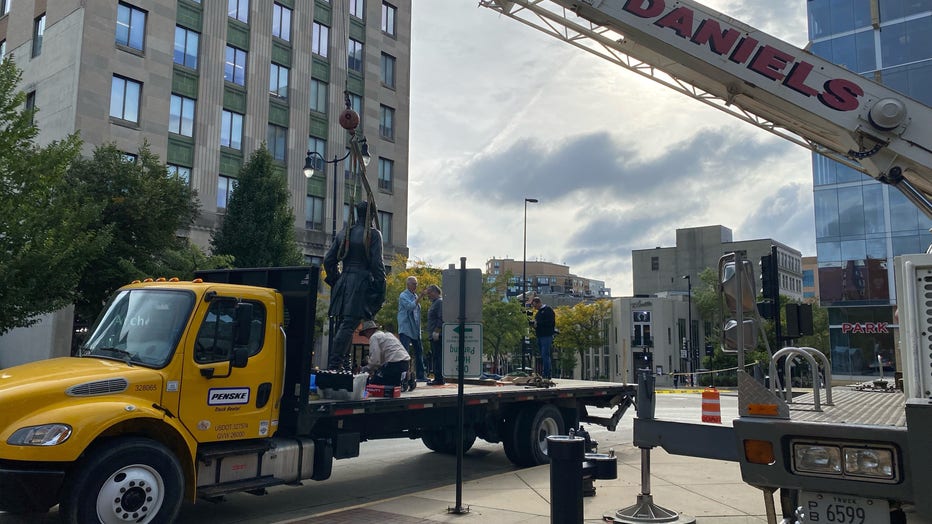 Crews work to restore the "Forward" statue and the one of Col. Hans Christian Heg, which were torn down by protesters last year, on Sept. 21, 2021. (WMTV/Erin Sullivan)

Heg was a Norwegian immigrant who became an outspoken abolitionist. He served in the 15th Wisconsin Regiment during the Civil War. He was killed at the Battle of Chickamauga in 1863.

His statue, funded by the Norwegian Society of America, had stood outside the Capitol since 1926. Heg's descendants wanted the statue restored.

The "Forward" statue was a bronze replica of the one that represented Wisconsin at the 1893 World's Columbian Exposition in Chicago. 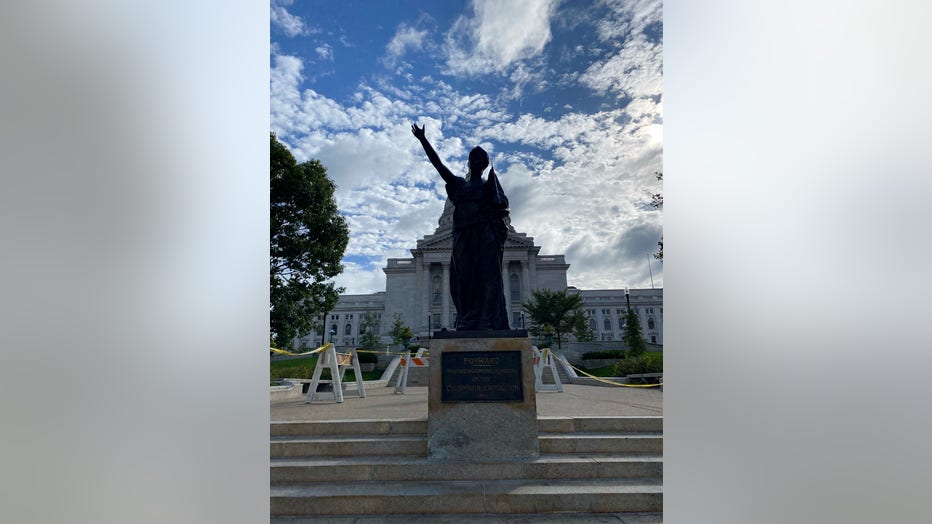 The "Forward" statue was reinstalled at the Wisconsin statehouse, in Madison, on Sept. 21, 2021. (WMTV/Erin Sullivan)

Democratic Gov. Tony Evers announced in December that the state had received $60,000 in federal grants to restore and reinstall both statues. State Department of Administration spokeswoman Tatyana Warrick said Tuesday that officials expect the final cost to be about $82,000. The Wisconsin Historical Society raised funds to cover the balance, she said.

Warrick added that the administration has submitted an insurance claim to cover at least some costs.

The reinstallations come as a task force works to erect a statue of Vel Phillips on the Capitol grounds. Phillips was the first Black woman to graduate from the University of Wisconsin Law School, the first female judge in Milwaukee County and the first Black judge in Wisconsin. She died in 2018.

Warrick said the State Capitol and Executive Residence Board, which oversees maintenance and decorations at the Capitol and the governor's mansion, is expected to vote on the Phillips statue's final design and placement in October.

The annual V100.7 Sista Strut is set for Saturday morning, Oct. 2 – and FOX6’s Gabrielle Mays is proud to help kick off the event.

Trying to expand interest in the sport the PGA of America invited Milwaukee area youth to the Ryder Cup.