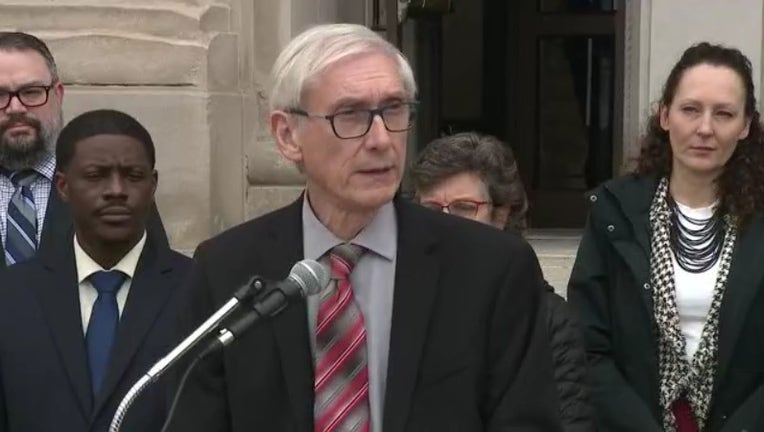 MADISON, Wis. - Gov. Tony Evers told the state Supreme Court on Thursday that it should allow him to submit additional evidence defending his legislative district boundary map that the U.S. Supreme Court rejected.

Alternately, Gov. Tony Evers also asked the Wisconsin Supreme Court to consider making a change to his map to reduce the number of Black-majority Assembly districts from seven to six. The Legislature’s map had five Black-majority districts in Milwaukee.

The U.S. Supreme Court said in its ruling Wednesday that the state Supreme Court failed to consider whether a "race-neutral alternative that did not add a seventh majority-black district would deny black voters equal political opportunity."

"No other path is tenable, as the preexisting maps are indisputably unconstitutional statewide, and this Court already observed that the Legislature’s proposal posed problems under the (Voting Rights Act)," Assistant Wisconsin Attorney General Anthony Russomanno wrote on behalf of Evers.

Kevin St. John, the attorney for Republican lawmakers, had no comment Thursday. The lawmakers and others involved in the lawsuit were all expected to make filings with the court soon given the case's urgency.

The court was expected to act quickly, given that candidates for the Legislature can begin circulating nomination papers April 15 to be on the ballot this fall.

Until the court adopts new maps, there are no maps in place for the fall legislative elections, said Riley Vetterkind, spokesman for the Wisconsin Elections Commission.

That means a candidate runs the risk of gathering signatures for his candidacy from voters who may not end up living in the district they are running for, making them invalid.

Evers’ attorney cautioned that the need for the court to act quickly should be balanced against the need to adopt legal maps without inviting more lawsuits.

While the Supreme Court rejected Wisconsin's legislative maps, it adopted the congressional maps as proposed by Evers. Republicans currently hold five of the state's eight seats and that map made one of those GOP districts more competitive.

In an apparent longshot bid, Wisconsin's Republican congressmen asked the state Supreme Court on Wednesday to allow them to submit a new map, even though the Supreme Court had already signed off on Evers' map.

The Supreme Court's ruling in the Wisconsin case marked the first time this redistricting cycle that the high court has overturned maps drawn by a state.

Redistricting is the process of redrawing the state’s political boundaries based on the latest census, showing how populations have changed in neighborhoods, cities and counties since 2010. Mapmakers can create an advantage for their political party in future elections by packing opponents’ voters into a few districts or spreading them thin among multiple districts — a process known as gerrymandering.

Firefighters responded to a fire at an apartment building on Milwaukee's northwest side Wednesday afternoon near 92nd and Silver Spring.

Keasean Ellis-Brown, the man accused of shooting an off-duty Milwaukee police detective in January, is due back in court Thursday, March 24 for a preliminary hearing.