MADISON, Wis. - Longtime Wisconsin Secretary of State Doug La Follette won his Democratic primary on Tuesday, advancing to a general election in which Republicans hope to win back the seat and give it power over elections.

And in Minnesota, Republican Kim Crockett — who has called the 2020 election "rigged" and campaigned on rolling back changes that have made it easier to vote — has advanced to the November election against Secretary of State Steve Simon, a Democrat seeking his third term. Primaries were also held Tuesday in Connecticut and Vermont.

This year, races for secretary of state have drawn tremendous interest and money largely because of the 2020 election, when voting systems and processes came under attack by former President Donald Trump and his supporters. There is no evidence of widespread fraud or manipulation of voting systems occurring in the 2020 election. 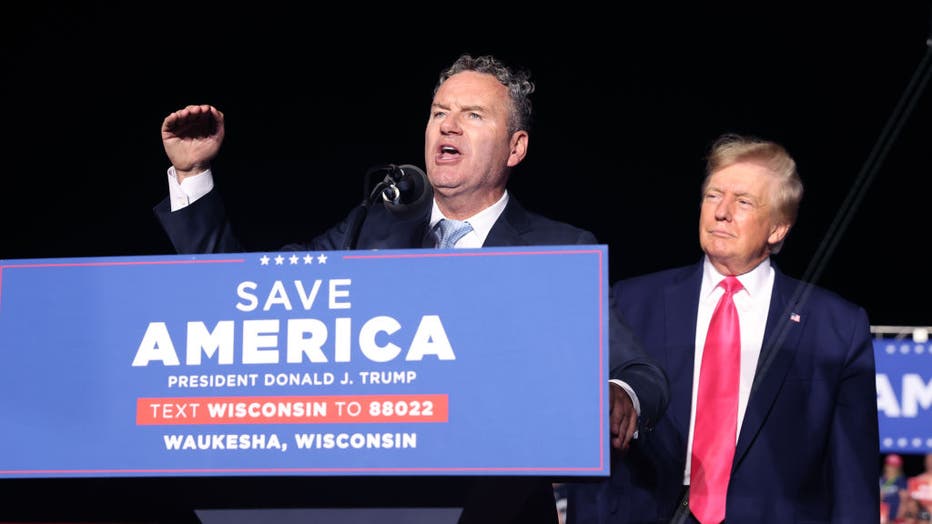 Unlike many states, the Wisconsin secretary of state is not the top elections official and the office’s only duties are to sit on a state timber board and verify certain travel documents. But Loudenbeck and other Republicans have said they want to change that and dismantle the Wisconsin Elections Commission, an agency established just six years ago with bipartisan support. 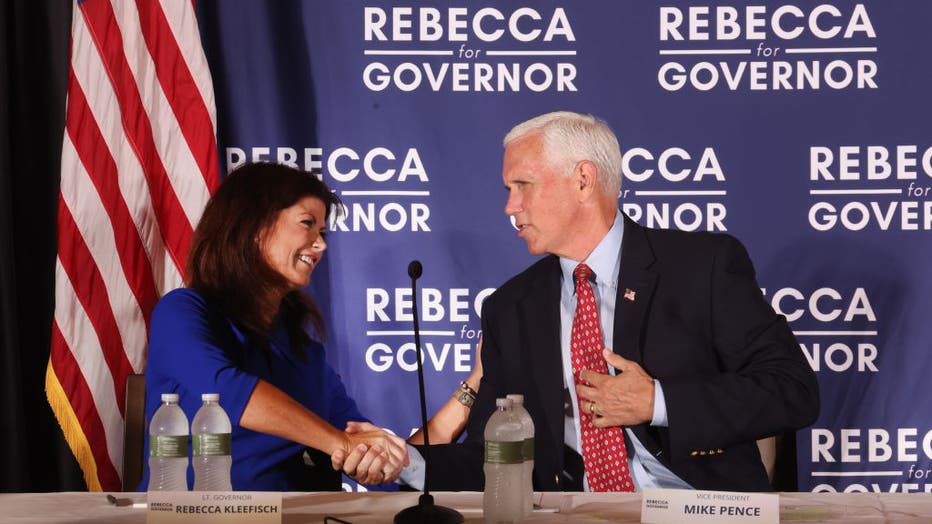 Loudenbeck and her primary opponents have echoed Trump’s false claims that fraud cost him the 2020 election and sharply criticized decisions made by the commission heading into the 2020 election, when the COVID-19 pandemic brought major challenges to running elections. They had argued that empowering the secretary of state would allow voters to hold someone accountable for important election-related decisions.

"Wisconsin voters have taken the first step forward in the effort to restore purpose and respect to the Office of Secretary of State," Loudenbeck said in a statement Tuesday night.

To accomplish their goal, Republicans also would need to defeat Democratic Gov. Tony Evers, who would block such a move, in November.

La Follette, 81, said he didn’t think primary voters were focused on the issue of who runs elections, but they will be.

"That’s what the election is all about now, " La Follette said Tuesday in a phone interview. "My message is simple and very clear: I think we in Wisconsin want to keep partisan politics out of the election process the way we have for 50 years."

At a polling location in Ozaukee County's Thiensville, Wisconsin GOP primary voter Franklin Szpot, 42, who works in marketing and sales, said he felt more confident in elections this year.

"I think it’s secure right now. I’m hoping that there isn’t any nonsense that happens," Szpot said. "After Trump lost, I had lost a lot of faith in that, and now I feel it’s kind of coming back with some of these candidates that are on the ballot."

In Minnesota, Crockett has also called the 2020 election a "train wreck" and accused state election officials of using the pandemic as "cover to change how we vote, but also how the vote is counted." Simon has defended the state's actions, calling the 2020 election "fundamentally fair, honest, accurate and secure."

There is no evidence to support Trump’s claims of a stolen election in 2020 or to suggest widespread fraud or tampering with voting machines or ballot drop boxes. Dozens of legal claims made by Trump and his allies after the election were rejected by judges, including ones appointed by Trump.

Indira Neill, 36, of Moorhead, Minnesota, said after casting her primary ballot Tuesday that she was more concerned about voters being manipulated than ballots being miscounted.

"My greater concern is generally things like disinformation campaigns and the spread of disinformation through social media," said Neill, a college professor who supported Simon. "We know this happened in the 2016 election, and there is no reason to believe these campaigns have stopped."

Races in Connecticut and Vermont were noteworthy because it was the first time in more than a decade that the seats were open. Both longtime Democratic secretaries of state opted not to seek reelection this year.

"I would like to appeal right now — today — and to all unaffiliated voters, Republican voters who are looking for an alternative to conspiracy theories and the sowing of misinformation, who believe that it’s time to invest in our democracy and make sure that we have the infrastructure to run clean elections," Thomas said in a speech Tuesday night.

William Simmons, 75, a retired school principal who recently moved from New York to Hartford, Connecticut, said he believes that the claims pushed by Trump and embraced by some secretary of state candidates across the country are "a bunch of baloney." He said he's confident that elections in Connecticut will be fine.

"I think people are fair and honest, and I’m not worried about my vote here," Simmons said, adding it doesn’t matter to him whether a Democrat or Republican wins in November as long as it is someone who is "fair and honest and has good morals."

In Vermont, the Democratic primary had drawn the most interest. The candidates were Deputy Secretary of State Chris Winters, state Rep. Sarah Copeland Hanzas, and Montpelier City Clerk John Odum.

A perennial candidate for office, H. Brooke Paige, was the lone person running in the GOP primary. He also appeared on the ballot for three other statewide offices.

Kleefisch is a former TV reporter who served with Walker for two terms, including when he effectively ended collective bargaining for most public employees in the state in 2011, drawing huge protests and a failed recall attempt. She says she is the best prepared to win statewide in November and to enact conservative priorities, including investing more in police, expanding school choice programs and implementing a flat income tax.

During a campaign stop with Kleefisch last week, Pence said no other gubernatorial candidate in the U.S. is "more capable, more experienced, or a more proven conservative."

Michels is co-owner of Wisconsin's largest construction company and has touted his work to build his family's business. He lost the 2004 Senate race to Democratic Sen. Russ Feingold, and has been a major donor to GOP politicians.

At a rally on Friday, Trump praised Michels as an "incredible success story." He criticized Kleefisch as part of the "failed establishment" and also took aim at Vos. He told supporters that Michels will win the primary "easily" and that he's the better choice to defeat Evers.

Michels pledged that "we are going to have election integrity here in Wisconsin." He also said he will bring "law and order" back to Wisconsin, criticized Evers' handling of schools and blamed Biden for rising prices.

GOP state Rep. Tim Ramthun is also making a long-shot bid for governor, and has made rescinding Wisconsin’s 10 electoral votes for Biden the centerpiece of his campaign.

In the Senate race, Barnes is the overwhelming favorite after rivals including Milwaukee Bucks executive Alex Lasry quit the race. A Milwaukee native and former state legislator who would be Wisconsin’s first Black senator, Barnes says he wants to help rebuild the middle class and protect abortion rights. A state ban on abortion took effect after the U.S. Supreme Court in June overturned the 1973 ruling that legalized abortion nationwide.

The race against Johnson is one of a few Senate toss-ups and already has been a fight between Barnes and Johnson, a millionaire and former owner of a plastics company who was first elected as part of the tea party movement in 2010.

Barnes has attacked Johnson for supporting a tax bill that benefitted wealthy donors and his own company, touting "wild conspiracy theories" about COVID-19 vaccines and for trying to deliver ballots from fake GOP electors to Pence on the day of the Capitol insurrection.

Johnson and Republicans have criticized Barnes as too liberal for Wisconsin, noting his endorsements from progressive Sens. Bernie Sanders of Vermont and Elizabeth Warren of Massachusetts. They have resurfaced moments from Barnes' past, including a photo of him holding a T-shirt that reads "Abolish ICE," or U.S. Immigration and Customs Enforcement.

Trump and Pence have split on gubernatorial candidates with mixed results. In Georgia, Gov. Brian Kemp — he also rejected Trump’s pressure to overturn his 2020 loss — had Pence’s support as he defeated a Trump-endorsed challenger, former U.S. Sen. David Perdue. But Kari Lake won the Arizona primary last week with Trump’s backing, defeating a Pence-backed candidate after saying she would not have certified Biden’s victory there.

The candidate Trump endorsed to take on Vos, Adam Steen, has said he would decertify Biden's victory.