"I had received a message on my phone, and it had come in obviously with an unsaved number and just, you know, the video message, so I’m not expecting, you know, what’s the message?" Pudleiner said.

"I just want to say that I think it’s absolutely terrible and tragic what happened, and I’m so, so sorry that you are affected by what happened," Watt said in the video.

Pudleiner is still recovering from the injuries he sustained in the attack. 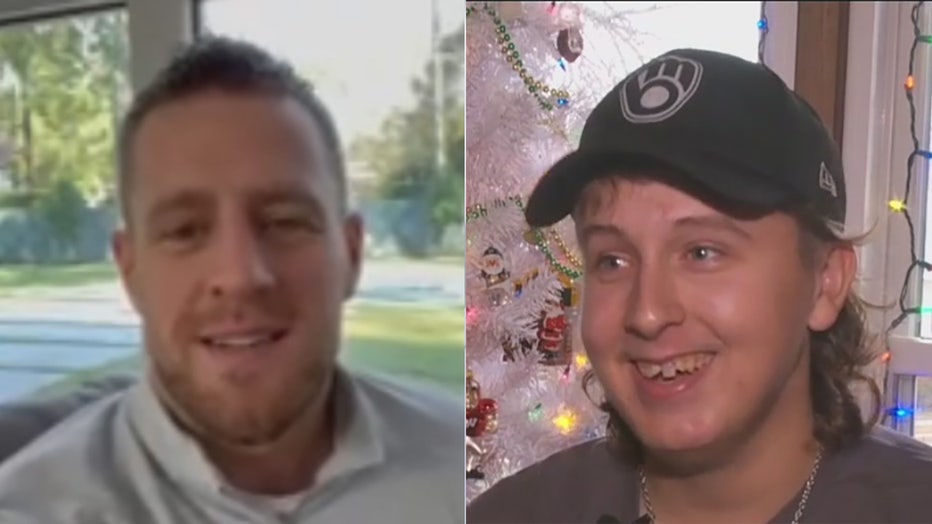 "Just the challenges after surgery and building that strength back up is the main thing that I’m dealing with right now," said Pudleiner.

The message from Watt put an instant smile on his face.

"It was just a very genuine and heartfelt message. It really shows, goes to show, how great of a person J.J. is and how he hasn’t forgotten his roots," Pudleiner said.

The message continued with yet another surprise for the teen.

"If we can get a little bit of a smile out of you today or pick you up in any way just to lift your spirits, then our mission is accomplished, so I’m going to send a little care package your way," Watt explained in the video.

Pudeliner was gifted some Arizona Cardinals gear – a hat, a flag and a personalized jersey. The message, along with the care package is something Pudleiner will never forget.

"I was more shocked and, you know, just in awe in general," Pudleiner said.

The 17-year-old said he plans to frame the Cardinals gear. But it is Wisconsin, after all, so it's no surprise he still and always will be a Packers fan.

"He’s a very persuasive guy but, not yet," said Pudleiner.

Pudleiner said he made sure to send a "thank you" message to Watt for the gifts.

The teen is also an avid racing fan. He said he is very grateful for the get well soon cards he's received from the racing community.

Teen Tyler Pudleiner was injured in the Waukesha parade attack. Now, the racing community gathering speed cards and raising funds for his recovery.

A Waukesha pastor is sharing his experience after rushing to the Christmas parade tragedy and assisting the injured.