A pod of dolphins joined a group of surfers in Carpinteria, California, swimming alongside the wave riders in a remarkable up-close encounter. (Credit: Jim Russi via Storyful)

A group of surfers were treated to a remarkable up-close encounter with a pod of dolphins while riding some waves off the coast of Carpinteria, California.

Video captured the moment's surfers were almost face-to-face with the animals as they rode the waves and jumped through the air.

Jim Russi, who recorded the video on Jan. 24, said the area, Rincon Point, is a popular surf spot for beachgoers.

"In my 40-plus years of traveling the world, photographing waves and surfers for the magazines, this is the best example of who the ‘real surfers’ are," Russi said. 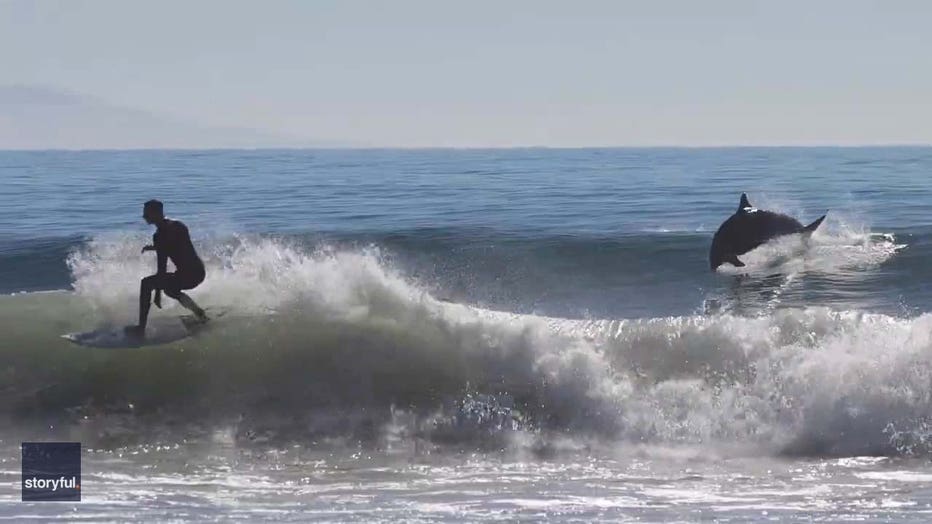 Dolphins have been known to ride the waves, whether it’s alongside a boat or catching the crest of a wave in the surf.

There are 36 different species of dolphin and they are considered one of the most intelligent animals in the world, according to World Wildlife Fund.

They are highly social animals and like to communicate and play just like humans, according to National Geographic.

Storyful contributed to this report. This story was reported from Los Angeles.