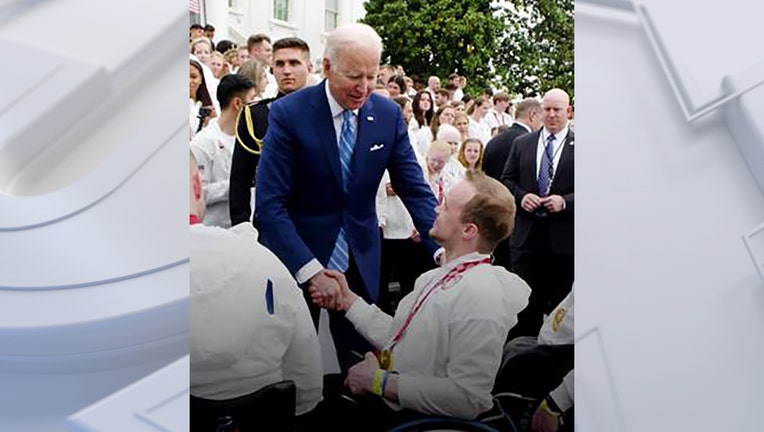 President Joe Biden shakes John Boie’s hand at a special ceremony at the Whitewater. (Photo courtesy of the White House via UW-Whitewater)

WHITEWATER, Wis. - Flanked by his fellow athletes from the U.S. Paralympic and Olympic teams, University of Wisconsin-Whitewater wheelchair basketball player and gold medalist John Boie was recognized by President Joe Biden and Vice President Kamala Harris at a special ceremony at the White House on May 4.

Boie, a UW-Whitewater alum from the Class of 2014 who also earned an MBA in 2019, is a member of the Team USA wheelchair basketball team and currently works as an academic adviser at the university.

About 600 American competitors from the summer games in Tokyo and the winter games in Beijing attended the special ceremony. Boie said the group toured the White House, going through the east wing and stopping at the Rose Garden.

"You could see into the Oval Office and watch the president at work," Boie said. "When he came outside and spoke to us, he told us how proud he was of us and of the country." 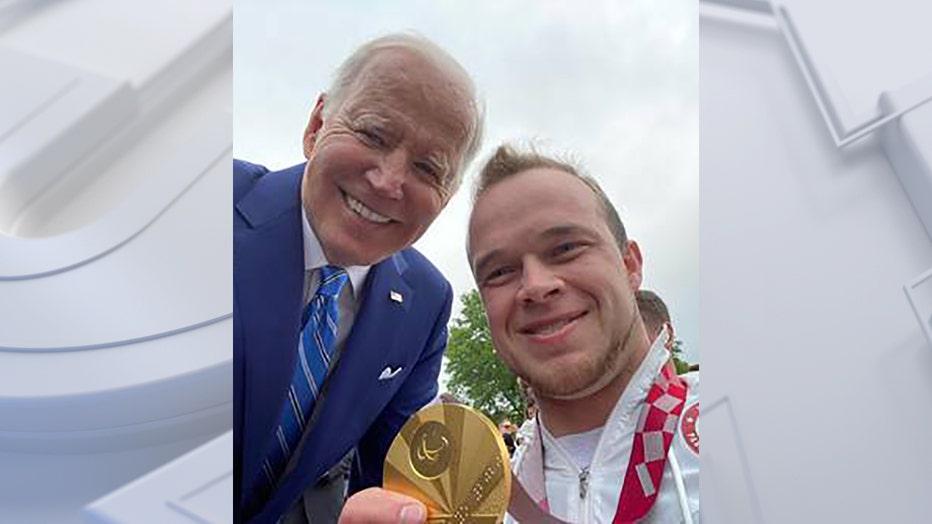 President Biden and John Boie take a selfie with a gold medal Boie earned at the Paralympic Games in Tokyo in 2021. (Photo courtesy of John Boie via UW-Whitewater)

"We believe in America, anything is possible. And you are the explanation of what we mean," said Biden. "You are – it’s all about possibility, breaking limits. You represent the very soul of America, and that’s not hyperbole. You genuinely do."

Boie had no idea that he was going to meet and shake hands with the president.

"I set myself up between the Oval Office and the podium. All of a sudden, he turns to come down our way. The next thing I know, he’s in front of me and I’m introducing myself," Boie said. "I led with a John-Boy Walton joke, and he noticed right away that we share the same initials. He said ‘JB? They call me JB!’ and we took a selfie, and he congratulated me and we shook hands again.

"Meeting the president was surreal. It’s the kind of person you don’t think you’re ever going to meet – or be within miles of –  so it was cool to make that personal connection with him."

Boie said Team USA created quite a buzz around Washington, D.C.: "All the residents and business owners knew who we were and asked, ‘Can I see your medal?’ and wanted to take pictures. We were wearing our medals proudly and explaining to folks what the games feel like and about the experience – the work, the sacrifice. It was really cool to have other athletes there who understand what went into all of this."

Boie will next compete for Team USA in July during a competition in Brazil. Qualifiers from that tournament will play in the world championships in November in Dubai.

With a smile of determination, Boie said: "Everyone’s geared up for Paris 2024."