The FIFA World Cup is the biggest men's soccer tournament in the world. Here's a look at the eight countries that have won the World Cup since the tournament was first held in 1930.

AUSTIN, Texas - Ricardo Pepi and the young Americans saw a red, white and blue crowd, a scene seldom at past U.S. World Cup qualifiers, then dominated Jamaica behind the new 18-year-old sensation and moved into first place.

"We’re just sitting there and we’re on the train," U.S. coach Gregg Berhalter said Thursday night after Pepi scored in the 49th and 62nd minutes in a 2-0 victory over Jamaica. "It's amazing. I mean, an 18-year-old gets an opportunity and takes advantage of it. What you see, and I think what I really like, he has this instinct, and it’s really hard to teach that that to players. And he has an instinct to score."

Pepi, an El Paso native whose goal broke a second-half tie at Honduras in his international debut on Sept. 8, became the youngest American to score in consecutive qualifiers.

With family and friends in the stands, he got the first goal from a flowing movement as good as can be produced by the U.S., which outshot the Reggae Boyz 17-5.

Goalkeeper Matt Turner rolled the ball to his right flank, where Sergiño Dest ran onto it just outside his own penalty area. In a burst of about 10 seconds, Dest sprinted forward while taking five touches and centered the ball to Yunus Musah, who was on the run.

Making his qualifying debut, Musah took four touches and dished wide to Dest, who one-timed a cross. Pepi broke away from Lowe and from about 8 yards glanced a downward header that went in on a bounce to the right of goalkeeper Andre Blake.

"Jamaica was so compact, we needed to go to the wings," Pepi said. "We unlocked them." 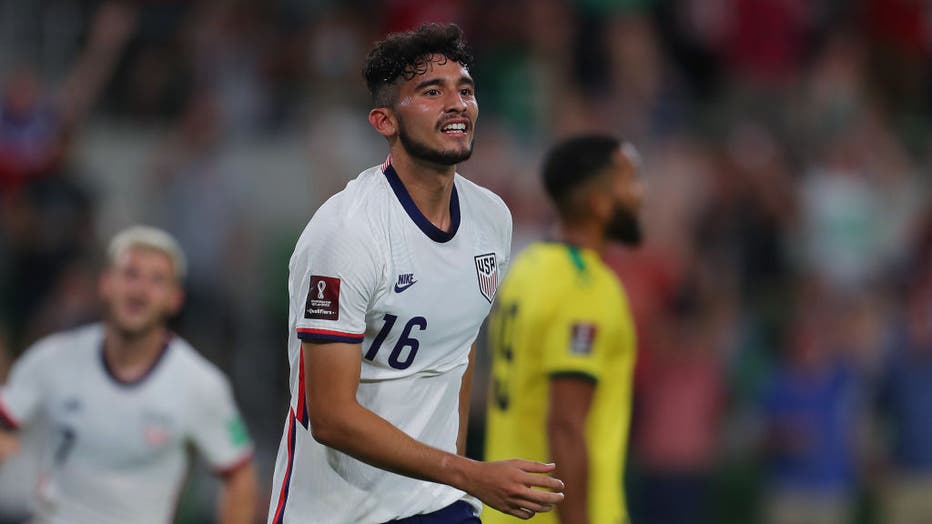 "We just didn’t quite get our press right," Jamaica defender Adrian Mariappa said. "At times just got a litte bit naive."

Pepi scored again when he re-directed a cross from Brenden Aaronson past Blake with from 6 yards after Antonee Robinson quickly moved up the flank.

Pepi made his Major League Soccer debut for Dallas in June 2019 and decided just before the start of qualifying this summer to play for the U.S. over Mexico. His sudden rise on the international stage has sparked interest in European clubs interested in a transfer.

Playing without injured attackers Christian Pulisic and Gio Reyna, the 13th-ranked U.S. improved to eight points after four of 14 matches in the final round of the North and Central American and Caribbean region.

Mexico dropped to second on goal difference after being held 1-1 by visiting Canada, which is third with six. Jorge Sanchez scored in the 21st minute for El Tri and Jonathan Osorio tied it in the 42nd.

Panama and El Salvador have five each after the Salvadorans won 1-0 at home on Enrico Hernández’s 37th-minute goal. Honduras and Costa Rica have three points apiece following a 0-0 draw in San Pedro Sula. No. 59 Jamaica, which has not gone to the World Cup since 1998, has one point.

Five more Americans made qualifying debuts, raising the total to 21 in four matches.

Musah like Pepi is 18, and Aaronson, Musah and Dest are 20. Their energy showed.

"They were dead in the second half," Aaronson said. "We tired them out because of the first half, the runs in behind."

In the very first minute, Aaronson passed to Pepi who gave the ball to Paul Arriola breaking in. Kemar Lawrence pulled him down and was given a yellow card by referee Reon Radix of Grenada.

"It's early in the game, I don't think it should be a red card," Aaronson said, "But maybe it could have."

"The second half we lost our discipline and the U.S. team capitalized on our mistakes," Jamaica coach Theodore Whitmore said.

Turner stretched to make a diving parry of Damion Lowe’s shot headed to the far post in the 41st minute. That was Jamaica's only shot on target.

"I don’t even think we think of ourselves as young guys anymore," Aaronson said. "We’re put in a situation where the whole country is looking at us and we need to perform, and everybody’s takes on this challenge."

Next up for the U.S. is a game at Panama — on the fourth anniversary of the loss at Trinidad that kept the Americans from the 2018 World Cup.

"We can’t get too carried away," Berhalter said. "The trap is going to be us thinking, we’re great and us thinking we’ve qualified for the World Cup, and if we do that we’ll get our ass kicked in Panama on Sunday."