There is an already historic shortage of truck drivers which have disrupted production and commerce, FOX 2's Taryn Asher reports.

The Department of Homeland Security has warned that truckers in the United States protesting COVID-19 restrictions, much like the demonstrations reported in Canada, could impact the Super Bowl this weekend.

The DHS said in a bulletin sent to local and state law enforcement agencies that it has received reports that truckers are planning to "potentially block roads in major metropolitan cities" in a protest against vaccine mandates and other issues.

DHS said the convoy could begin in Southern California as early as this weekend, possibly disrupting traffic around the Super Bowl, and reach Washington in March in time for the State of the Union, according to a copy of Tuesday’s bulletin obtained by The Associated Press. It said that the protest could be disruptive and tie up traffic but that there have been no calls for violence.

"DHS is tracking reports of a potential convoy that may be planning to travel to several U.S. cities. We have not observed specific calls for violence within the United States associated with this convoy, and are working closely with our federal, state, and local partners to continuously assess the threat environment and keep our communities safe. DHS will continue to share timely and actionable information with the public," a DHS spokesperson told FOX Television Stations. "Over the past year, DHS has increased timely and actionable intelligence and information sharing and strengthened operational coordination with partners across every level of government and the private sector."

Meanwhile, the truck blockade by Canadians protesting the country’s COVID-19 restrictions is tightening the screws on the auto industry, forcing Ford, General Motors and other car companies to shut down plants or otherwise reduce production on both sides of the U.S. border.

The bumper-to-bumper demonstration by the self-proclaimed Freedom Truck Convoy entered its fourth day Thursday at the Ambassador Bridge connecting Windsor, Ontario, to Detroit, disrupting the flow of auto parts and other products between the two countries. 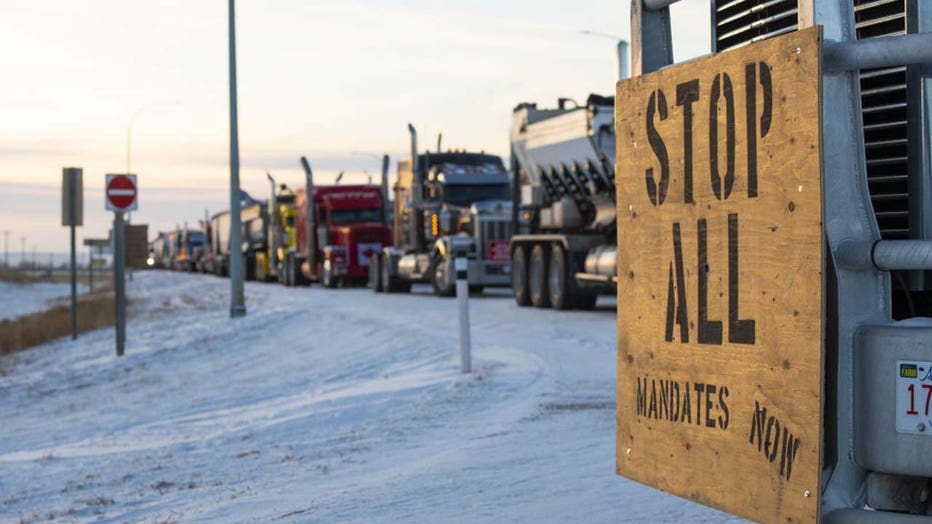 FILE - A protest placard reading "Stop all mandates now" posted on a truck blocking the U.S.-Canada border during a demonstration in Coutts, Alberta, Canada on Feb. 2, 2022. (Gavin John/Bloomberg via Getty Images)

The Ambassador Bridge is the busiest U.S.-Canadian border crossing, carrying 25% of all trade between the two countries, and the effects of the blockade there were felt rapidly.‘

Ford said its Windsor, Ontario, engine plant reopened Thursday after being shut down on Wednesday because of a lack of parts. But the factory and the company’s assembly plant in Oakville, Ontario, near Toronto, were operating at reduced capacity, the automaker said.

On the U.S. side, GM canceled its second shift on Wednesday and its first shift on Thursday at its SUV factory outside Lansing, Michigan.

Toyota said it will not be able to manufacture anything at three Canadian plants for the rest of the week because of parts shortages. In a statement, the automaker blamed supply chain disruptions, weather and pandemic-related problems, but the shutdowns came just days after the blockade began Monday.

Honda said that its assembly plant in Alliston, Ontario, north of Toronto, had to suspend production on one assembly line on Wednesday, but that it was back in operation Thursday.

Stellantis, formerly Fiat Chrysler, said all of its North American factories were running Thursday, but shortages from the blockade forced it to shorten shifts at several plants.

"My message is simple: reopen traffic on the bridge," she said in a statement. "The blockade is having a significant impact on Michigan’s working families who are just trying to do their jobs. Our communities and automotive, manufacturing, and agriculture businesses are feeling the effects. It’s hitting paychecks and production lines. That is unacceptable."

Hundreds of demonstrators in trucks have also paralyzed the streets of downtown Ottawa, Canada for almost two weeks, and dozens more have been blocking the border crossing at Coutts, Alberta, opposite Montana, decrying vaccine mandates for truckers and other COVID-19 restrictions and railing against Prime Minister Justin Trudeau.

Protesters also began a new blockade at Emerson, Manitoba, across the border from North Dakota.

Windsor Mayor Drew Dilkens said Wednesday that police had not removed the protesters there for fear of inflaming the situation. But he added: "We’re not going to let this happen for a prolonged period of time."

As of Wednesday, the demonstration involved 50 to 74 vehicles and about 100 protesters, police said. Ottawa police said Thursday they were "able to negotiate for a dozen more trucks to leave" downtown and said 10 others left, but the city warned about traffic disruptions because of a new demonstration at the Ottawa airport. Police also said a deliberate effort to flood its 911 line with calls was underway.

To get around the blockade and into Canada, truckers in the Detroit area have had to drive 70 miles north to Port Huron, Michigan, and cross the Blue Water Bridge, where there was a 4½-hour delay leaving the U.S.