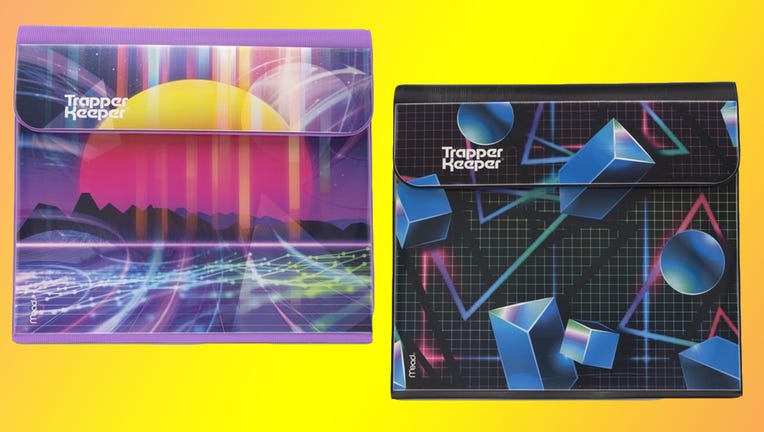 Trapper Keepers are pictured in promotional images shared by Mead in 2021 when the company relaunched them for the school year. (Credit: Mead)

E. Bryant Crutchfield, a paper company executive who created the Trapper Keeper popular with students throughout the 1980s and early 1990s, has died, according to multiple reports. He was 85.

Crutchfield died on Aug. 21, at a hospice center in Marietta, Georgia, the New York Times reported. His son, Kenneth, told the newspaper that the cause was bone cancer.

The Trapper Keeper, first invented by Crutchfield for employer Mead Corp. in the late 1970s, rose to become one of the most iconic school supplies for middle school and high school students. It had "trappers," or folders, to hold papers, which were then held in place by a set of rings in the "keeper," which could be closed with a snap or patch of Velcro.

In the 1970s, Crutchfield was working as Mead’s director of new ventures in Ohio, and part of his job was to identify trends in the marketplace, according to a 2017 interview he gave to Mental Floss. Some research indicated that there would be more students per classroom in the coming years, and those students would be taking more classes with smaller lockers.

After more research and focus groups, Crutchfield developed the Trapper Keeper — launched in 1978. It quickly became a hit and continued to be throughout the next decade and into the 1990s.

"We rolled it out, and it was just like a rocket," Crutchfield told Mental Floss in 2017. "It was the biggest thing we’d ever done. I saw kids fight over designs in retail."

To date, more than 75 million Trapper Keepers have been sold since its introduction, according to Mead, which is now owned by parent company ACCO Brands. Mead still sells Trapper Keepers online.

Crutchfield spent 34 years of his career at the Mead Paper Corp., based in Dayton, Ohio, according to the Dayton Daily News, citing his obituary. He then worked another 10 years at Georgia Pacific before retiring, the newspaper said.

Crutchfield had seven U.S. Patents in his name, according to the newspaper, which added that he was proud of his business accomplishments and the people that he met along the way.

He is survived by his wife, Virginia, his son, daughter, six grandchildren, and two great-grandchildren, the Dayton Daily News reported.