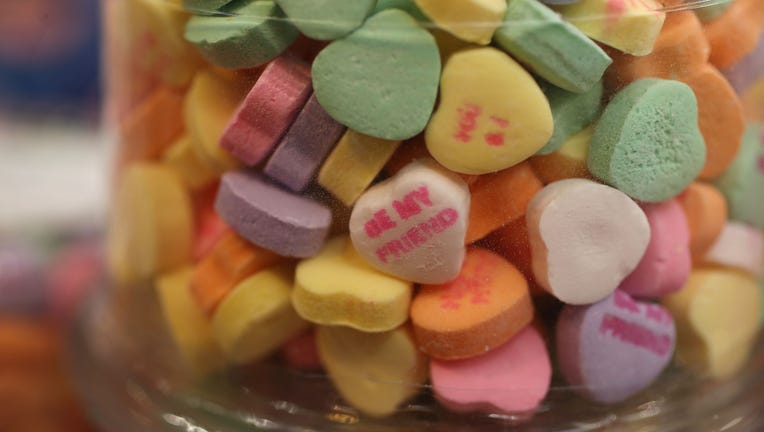 WILTON MANORS, FLORIDA - JANUARY 29: Sweetheart candy hearts are seen on the shelf at the To The Moon Marketplace on January 29, 2019 in Wilton Manors, Florida. William Newcomb who works at the store said, 'they stocked up early on the heart shape ca

BRYAN, Ohio - One of the country’s favorite Valentine’s Day candy is about to get sweeter.

Sweethearts candies said it will roll out a new theme for its engraved messages in 2022: Words of Encouragement.

The popular treat will feature 16 new sayings including "WAY 2 GO," "CRUSH IT" AND "HIGH FIVE." The classic messages will remain such as "BE MINE," HUG ME" and "CUTIE PIE."

Candy makers say this year’s theme aims to show people "how special they are, give their spirits a lift and say a special thank you to anyone who helped them do and become their best."

RELATED: How to send Valentines to kids in hospitals, nursing home residents and more

"From the beginning, our candies have delighted while serving a purpose," Diana Eschhofen, Director of Corporate Communications for Spangler Candy Company, Sweethearts’ family-owned maker said in a news release. "They give people a playfully affectionate way to express to friends, family, and other important people in our lives how special they are."

5 facts you might not have known about Valentine's Day

Here are five Valentine’s Day facts you might not have known about, as love in the air.

"Words of encouragement are timeless and relevant for people of all generations, just like Sweethearts Candies, which have been shared amongst family and friends for 120 years," she continued.

In addition, Sweethearts will send 500 people a free box of candy with a special card from their admirers. The company is accepting nominations on its website.

The New England Confectionery Co. — or Necco — had been making the popular candies since 1886. But the company filed for bankruptcy protection in 2018. Ohio-based Spangler Candy Co. bought Necco.