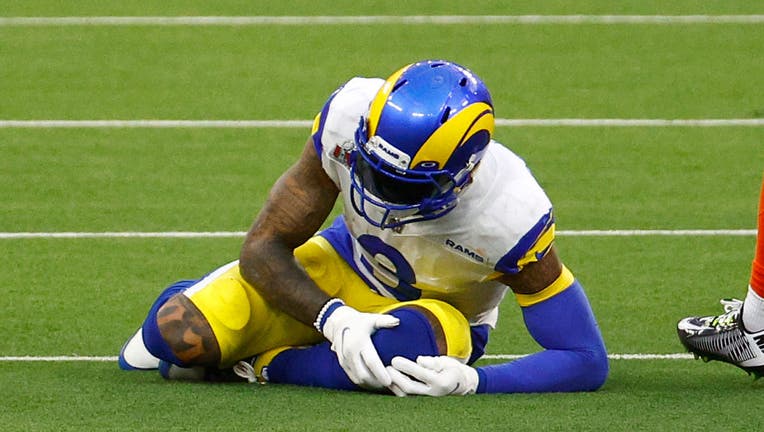 INGLEWOOD, CALIFORNIA - FEBRUARY 13: Odell Beckham Jr. #3 of the Los Angeles Rams lies on the ground after an injury in the second quarter against the Cincinnati Bengals during Super Bowl LVI at SoFi Stadium on February 13, 2022 in Inglewood, Califor

A source told Ian Rapoport with the NFL Network Monday that Beckham may have torn his ACL, meaning he will have a long road to recovery.

During the second quarter of the big game against the Bengals, Beckham appeared to have suffered a noncontact injury to one of his knees. The wide receiver was able to walk off the field under his own power but was taken into the locker room prior to the end of the first half.

Beckham helped the Rams draw first blood in Sunday's game after he hauled in a 17-yard touchdown pass from Matthew Stafford to give the Rams a 7-0 lead after a made PAT.

The Rams announced late in the third quarter that Beckham will be out for the rest of the game. The NFC champs are already without wide receiver Robert Woods and tight end Tyler Higbee for Super Bowl LVI.

His absence was apparent as more pressure shifted to Cooper Kupp.

With a strong defensive line, the Rams got a Hollywood ending and were able to win on their home turf 23-20.

Beckham, a free agent, has stated he would like to continue playing for the Rams, and now it's unclear how his injury will impact that decision for the Rams front office.