President Joe Biden announced his student loan forgiveness plan, with more details in the coming weeks, and borrowers across Wisconsin would qualify.

MILWAUKEE - President Joe Biden said the U.S. Department of Education will share more information on student loan forgiveness in the coming weeks, and borrowers across Wisconsin would qualify.

Borrowers with federally backed students loans from before July 1 who make less than $125,000 per year are eligible for relief.

"It’s debilitating. I don’t think the older generation realizes how crippling $60,000 can be when you’re just starting out your life," said Karie Meier, a nurse who graduated from Michigan State University and Milwaukee School of Engineering.

Meier is not alone. The Department of Education said more than 43 million Americans have federal government student loans totaling $1.6 trillion. The Education Data Initiative said the average person has $37,667 in federal student loan debt – and it takes 20 years to pay it off.

"Right now, they haven’t been making us pay them, so that’s been great. But the thought of them making us pay them again definitely causes a little anxiety," said Nicole Carrao, a 2017 Milwaukee Area Technical College graduate. She has $14,000 in student loans left. 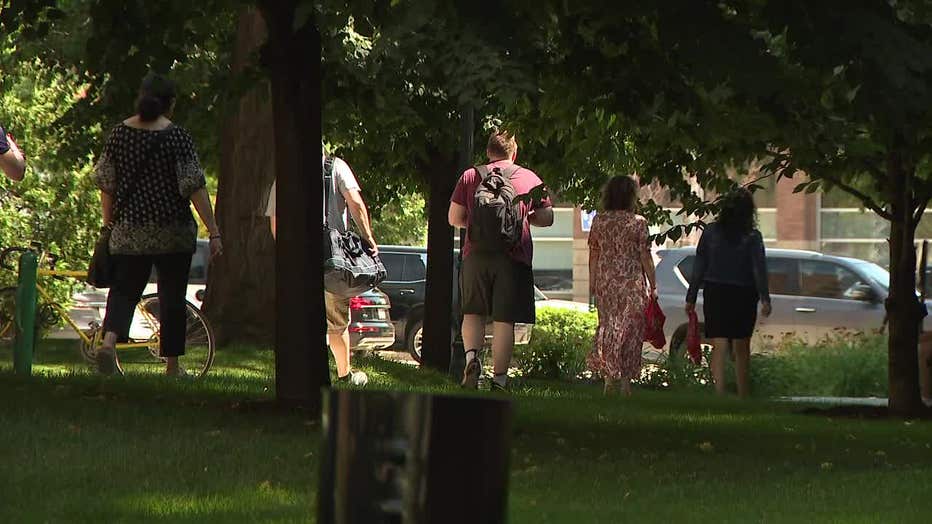 The federal government put paying back the loans on hold during the COVID-19 pandemic. Biden said payments will resume in January. Wednesday, he announced $10,000 will be knocked off federal student loans and $20,000 will be cut for Pell Grant recipients who also have outstanding loans.

"All this means people can finally crawl out from under that mountain of debt to get on top of their rent and their utilities, to finally think about buying a home or starting a family," Biden said.

READ MORE: What student loans are eligible for forgiveness? Here's a breakdown

"That would be amazing. I would be so happy," said Carrao.

The plan will cost taxpayers, too. The Penn Wharton Budget Model estimates the $10,000 forgiveness would cost $300 billion.

"I think it’s a relief for some people, but for those who are hardworking individuals who paid for it themselves, it think it’s kind of demeaning to them," said Faye Overly, who paid for her own schooling. "I think a lot of people worked very hard for their money, and they worked very hard for the education and to me, I would have a problem with having that forgiven for some, but not for the others. I don’t think government needs to do that."

"He’s going to get a lot of blowback from this from students who have already paid back their loans. They’re like: What about us? We paid all of ours and didn’t get any forgiveness,'" Gail Radonski said.

President Biden said, under his plan, after you pay your loan for 20 years, you wouldn't have to pay anymore. The Republican National Committee said it's not free and is robbing the working class to bail out the rich. It is possible groups could sue to stop the president's loan forgiveness.

"President Biden is using the Covid ‘national emergency’ as his authority to continue reckless spending. His plan to shift the burden of college debt to all taxpayers accelerates inflation and does nothing to address the underlying issue of rising tuition costs."

"Today, an estimated 30 percent of job openings require a 2-year or 4-year degree. The reality is that for most, the pathway to the American Dream means pursuing a higher education or training as tuitions soar, requiring increasingly absurd amounts of debt to be competitive in the job market. Not taking this step to unlock greater potential in the workforce would be to be stuck on stupid waiting on dumb to come.

"We need to reform our current educational model that has created this affordability and debt trap for students, where colleges tuitions rise and rise and students, as a result, are forced to take on increasing debt loads from federally subsidized financial firms.

"I am pleased that President Biden announced a plan to address student debt for borrowers, which will reach those most in need of relief and make loan repayment for others less burdensome. Thanks to this loan forgiveness, many people saddled with heavy debt burdens will now be able to purchase homes, buy cars, and take other steps to fully participate in our economy.

"For me, college affordability is personal. I entered college at Marquette as a poor, single teenager mother. As a TRIO alum and co-chair of the TRIO Caucus, I am fully committed to making higher education more affordable and accessible. That’s why I support increasing funding for Pell Grant aid to better meet the needs of students and will continue championing vital TRIO programs to support vulnerable students."

"Wisconsinites owe a cumulative $23.2 billion in student loan debt, according to data from the Education Data Initiative. The average Wisconsin borrower owes nearly $30,000 in student loan debt and more than 727,000 residents owe student loans. Depending on their circumstance, many Wisconsin residents could see nearly 1/3 to roughly 60% of their student loan debt cleared. Among the state’s indebted student borrowers, 17.2% owe less than $5,000, which means their debt could be completely wiped out.

"This is HUGE! For families that are struggling to make these payments, this loan forgiveness announcement is a game changer. It changes the ability to purchase a home, lower overall debt, and support yourself or your family.

"For those complaining that it didn’t go far enough, I think you should talk to residents that will be impacted by today’s announcement. A number of factors make post-secondary education unaffordable. Whether the skyrocketing cost of college education, wages that don’t reflect the true cost of living, affordable healthcare, childcare and housing, we know we’ve got work to do. But, this is a heck of a start for many famiies.

"Biden and the U.S. Department of Education has rolled out multiple student loan debt cancellation announcements over the last few months. The programs have helped thousands of Wisconsinites and many residents are breathing a little easier today."

"Considering the significant unmet financial need for UW-Milwaukee students, today’s announcement is of particular value for many of our alumni. This is an important step for our region enabling graduates to flourish, removing debt and providing access to homeownership and other life changing financial investments that stimulate our local and statewide economies."