Robert Alexander, a political science professor and author of 'Representation and the Electoral College', discusses faithless electors and their impact in an election.

State legislatures cannot substitute their judgment for the will of the people by directly appointing their preferred slate of presidential electors after Election Day, legal experts say.

The National Task Force on Election Crises, a cross-partisan group of more than 50 experts dedicated to ensuring a free and fair 2020 election, released a briefing to dispel this notion — which has been floated by some backers of President Donald Trump in the midst of his projected loss to President-elect Joe Biden.

“GET READY TO DO YOUR CONSTITUTIONAL DUTY,” conservative radio host Mark Levin tweeted on Nov. 5, adding that Republican state legislatures have “the final say over the choosing of electors.” The post was flagged by Twitter as being disputed.

Still, Levin’s post was reportedly retweeted by the president’s son, Donald Trump, Jr. And during an appearance on FOX News, Sen. Lindsey Graham declined to dismiss a suggestion that Pennsylvania election results should be thrown out over unsubstantiated claims of voter fraud.

FOX News and the Associated Press projected Biden as the winner of the key battleground state, and overall, the former vice president was also on track to win the national popular vote by more than 4 million.

“Everything should be on the table,” Graham, R-S.C., said. 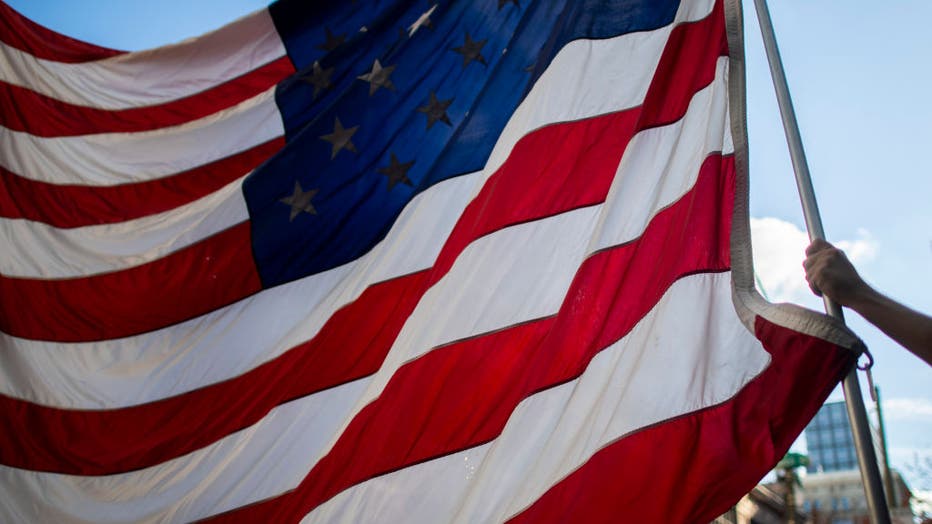 A U.S. flag is shown on Nov. 10, 2020 in Philadelphia, Pennsylvania. (Photo by Mark Makela/Getty Images)

The idea of state legislatures overriding the popular vote in favor of Trump was also raised in September, when Barton Gellman in The Atlantic reported that some state legislators had reportedly discussed this idea — one with the Trump campaign.

Pennsylvania Republicans soon scoffed at the story, including Pennsylvania Senate Majority Leader Jake Corman — who was quoted in The Atlantic piece.

“I have had ZERO contact with the Trump campaign or others about changing Pennsylvania’s long-standing tradition of appointing electors consistent with the popular vote,” Corman said in a statement Sept. 25 that remains pinned to the top of his Twitter feed.

What does the Constitution say?

The U.S. president is not chosen directly by voters, but rather, the voters choose presidential electors from each state. And the 538 electors who make up the Electoral College cast the official votes for president.

The Constitution delegates to state legislatures the power to choose the “manner” of appointing these electors. For more than 100 years, every one of the 50 states has chosen presidential electors based on the winner of the popular vote.

The Constitution also delegates to Congress the choice of when presidential electors must be appointed — which Congress has designated as “the Tuesday after the first Monday in November” — also known to Americans as Election Day.

“Proponents of the legislative-appointment theory read too much into the first constitutional provision and forget about the second,” wrote Adav Noti of Campaign Legal Center, a nonpartisan, nonprofit organization that focuses on voting rights, campaign finance, anti-gerrymandering work and government ethics.

Noti points out that although every state has chosen its electors by popular vote for more than a century, most constitutional experts agree that, under the state legislatures’ authority to choose the “manner” of appointing electors, a legislature could theoretically decide before Election Day to cancel the popular vote for presidential electors and instead appoint them directly.

“Once that date passed, the determinative popular votes had all been cast, and therefore the legislature’s authority to change the state’s manner of appointing electors in 2020 passed as well,” Noti wrote in a piece published on Just Security, which focuses on U.S. national security law and policy.

In other words, a state’s legislature could not retroactively change the current laws to override popular vote.

A limited exception for emergencies

There is a single, narrow exception to federal law that provides if a state “has held an election for the purpose of choosing electors, and has failed to make a choice on the day prescribed by law,” the state’s electors may be appointed on a later date “in such a manner as the legislature of such state may direct.”

This has never occurred in American history, and Congress has never expressly defined what would constitute an election failure. Some have suggested perhaps a natural disaster on Election Day rendering parts of a state uninhabitable, but delays in counting ballots or resolving election disputes do not meet that standard.

“It is clear from the structure of 3 U.S.C. §§ 1 and 2, that delays in a state’s completion of its vote tally or in resolving related disputes do not amount to a ‘failure to make a choice,’” the National Task Force on Election Crises wrote in its briefing.

There has been no indication of widespread improperly counted or illegally cast votes that would shift the outcome of the 2020 election, as Trump has falsely claimed. Election officials from both political parties have publicly stated the election went well, though there have been minor issues that are typical in elections — such as voting machines breaking and ballots that were miscast and lost.

Further reasons why experts say the scenario isn’t legal is that the Electoral College rules (3 U.S. Code § 5) address a situation in which a state sends two sets of votes. The rules for counting electoral votes give “conclusive” effect to the votes cast by the electors chosen on Election Day, “and require that those votes be counted to the exclusion of any others,” Noti wrote.

The Supreme Court also ruled unanimously this year that a state may require presidential electors to follow the state’s popular vote result in the Electoral College.

A state may instruct “electors that they have no ground for reversing the vote of millions of its citizens," Justice Elena Kagan wrote in her majority opinion. "That direction accords with the Constitution — as well as with the trust of a Nation that here, We the People rule,” Kagan wrote.

“No one would try to do such a thing”

Noti said this “legislative-appointment theory” is a question that has “been floating around the academic world, but it’s never come up in real life.”

“I think the almost universal expectation is that no one would try to do such a thing. And even if they did, it would fail under a number of different legal and constitutional provisions,” Noti said.

Noti, who serves as the Campaign Legal Center’s senior director for trial litigation and chief of staff, also noted the 2020 presidential election results with Biden claiming 290 electoral votes to Trump’s 214.

“Another reason, just as a practical matter, is that it doesn't matter anymore. The margin is such that even if Pennsylvania and Michigan did that, it wouldn't change the results,” Noti said.

“Why try to do something illegal and deeply undemocratic if it’s not going to have the end result?” he added.