An altercation between a teenager and a security guard at the Ingleside Hotel's Springs Water Park ended in what the teen's mom describes as a chokehold.

WAUKESHA, Wis. - A fight drained the fun out of a Waukesha water park on Thursday night, May 20.

The altercation between a teenager and a security guard at the Ingleside Hotel's Springs Water Park ended in what the teen's mom describes as a chokehold.

There are two very different versions of events that unfolded.

Viewer video showed a chaotic scene outside the water park. Inside, Symone Evans said her 16-year-old son and another teen had an altercation with a security guard.

Evans said her son was at the water park on a field trip with a group celebrating the completion of a community service program when a security guard accused him of taking inappropriate photos of female guests.

"He gave the man the phone and asked why I would be taking pictures of little kids?  That’s a pervert. That’s some weird stuff to be doing. He let the man see the phone and see he hadn’t taken any pictures," said Evans.

Police said the teen was combative and the altercation ended with the security guard putting him in a neck restraint.

"He currently has bruises on his neck, a little on his back. His chest was hurting," said Evans. 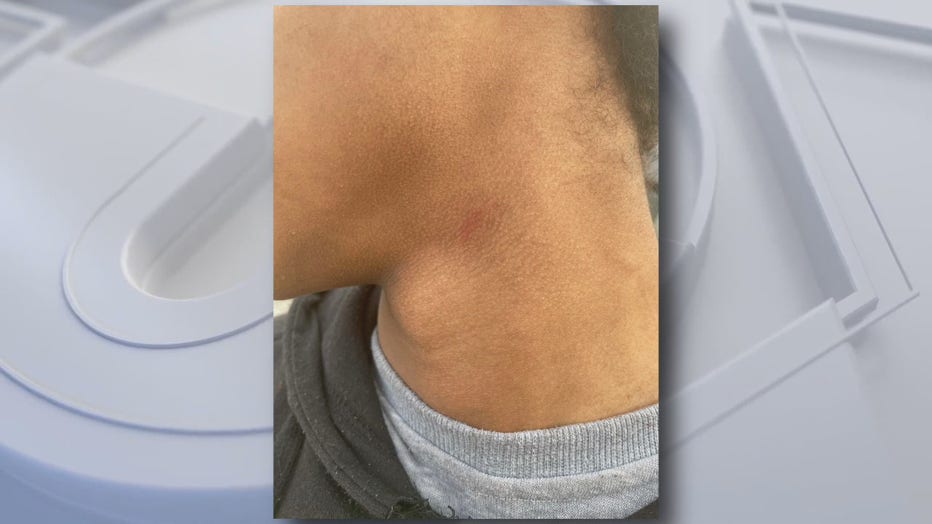 After a group of chaperones allegedly made significant threats, police responded with a dozen units.

Police told FOX6 News they are still investigating everyone involved – including the security guard.

"I really feel like that man should be arrested. No one should be able to choke you to sleep," Evans said.

A water park spokeswoman said the water park takes safety very seriously and is working with Waukesha police on the continued investigation.

"At approximately 5:00 pm, our security team was called to the water park after receiving multiple guest complaints about two males taking inappropriate photos of female guests. Our security team and members of our management team responded to the complaints. After talking with the two individuals and their chaperone, the two males were asked to leave property. As they were leaving the property, eye witness statements from guests and employees reflect that the two males made verbal threats and physically assaulted our staff. The hotel called 911 immediately and the security team defended themselves with minimum necessary measures to ensure the safety of the individuals, staff members and other guests in the area while waiting for police to arrive on scene. The Waukesha Police Department responded and interviewed multiple witnesses at the scene. We appreciate their assistance in dealing with this incident and will continue to work with them to provide any additional information needed as part of their investigation. The safety and security of guests and employees is always our top priority.

Edward Matthes of Milwaukee was sentenced to 63 months in federal prison for carrying out a $2.6 million dollar investment scheme that defrauded 27 victims, most of whom were elderly.