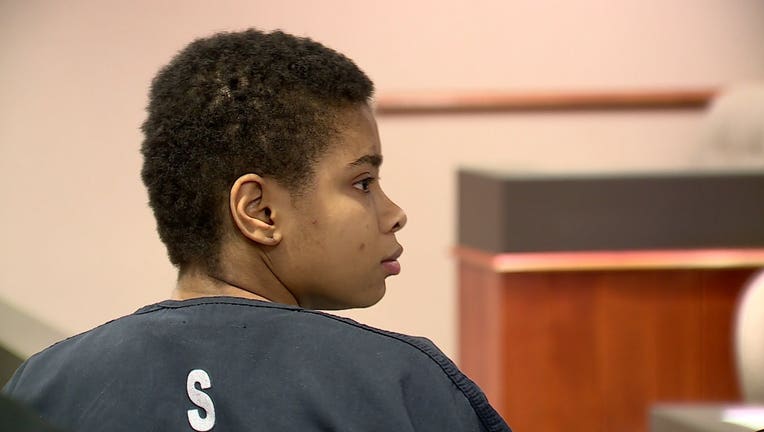 KENOSHA, Wis. - On a June night in 2018, 17-year-old Chrystul Kizer put a .38-caliber pistol in her book bag and took an Uber from Milwaukee to Kenosha.

She walked into Randall Volar's home. She had met Volar on a sex trafficking website and for the past year he had been molesting her and selling her as a prostitute, according to court documents.

Kizer would tell detectives later that Volar, 34, tried to touch her. She pulled out her gun, told him to sit in a chair and shot him in the head. She then burned his house down and stole his BMW, according to court documents.

What looks like a clear-cut case of criminal homicide could actually be legal under a Wisconsin law that absolves sex trafficking victims of crimes related to being trafficked. The state Supreme Court is poised to decide whether Kizer can argue that immunity extends to murder in a case that could help define the scope of sex trafficking victims' immunity in dozens of states across the country.

Kizer, now 21, wants to argue at trial that her actions were justified under a law then-Gov. Jim Doyle signed in 2008 that absolves sex trafficking victims of "any offense committed as a direct result" of being trafficked. But a Kenosha County judge ruled Kizer can't raise that argument, saying that extending the law to cover homicide would be absurd.

Anti-violence groups have flocked to Kizer's defense, arguing in legal briefs that trafficking victims feel trapped and may feel they have to take matters into their own hands.

Oral arguments are scheduled for Tuesday. The high court isn't being asked to decide whether Kizer is guilty, only if she can argue at trial that the law protects her from criminal liability. The decision won't legally bind other states with similar immunity laws for trafficking victims. But it could create a baseline for prosecutorial and defense strategies in similar cases and affect how victims respond to abuse, legal experts said.

"If we're living in a civilized society, it begs the question, are we going to give immunity to people who are sexually abused to kill their abusers?" said Julius Kim, a defense attorney and former Milwaukee County assistant district attorney. "The implications can be devastating. Attorneys general across the country are going to pay attention to see how this plays out."

Nearly 40 states have passed laws over the last decade that provide sex trafficking victims some level of criminal immunity, according to Legal Action of Wisconsin, which provides legal assistance for low-income people. The laws came as legislators began to understand that traffickers exploit their victims and that states should prioritize rehabilitation and help rather than punishment.

The extent of immunity varies among states. California, Kentucky, Montana and North Dakota, for example, extend immunity to non-prostitution-related crimes, according to a court brief the Harvard Law School Gender Justice Clinic and 12 other anti-violence groups filed supporting Kizer.

Other states limit immunity to prostitution-related offenses, according to the coalition. Wisconsin, Iowa, Oklahoma, South Carolina and Wyoming place no limits on immunity but defendants must show the crimes were related to being trafficked.

Kizer's attorneys allege in court filings that Kenosha police suspected Volar was trafficking children for sex several months before he was killed. The attorneys allege he filmed himself sexually assaulting numerous children. Police arrested Volar in February 2018 and seized evidence of sexual assault and child pornography from his home but later released him and no charges were filed, according to the filings.

Her attorneys went on to say she was 16 when she met Volar. Kizer told the Washington Post in a 2019 interview from jail that she met Volar on Backpage.com, a website known to facilitate sex trafficking that the federal government has since shut down. She said she needed money for snacks and school. Volar sexually molested her and trafficked her through the website to others, she told the Post.

According to the criminal complaint, Volar paid for an Uber to bring Kizer from Milwaukee to his home in Kenosha in June 2018. The house caught fire that night. Police discovered Volar's body slumped in a chair in the house. He had been shot and his BMW was missing.

Kizer told detectives that she got a gun to protect herself. She said she was tired of Volar touching her and shot him because a tote blocked the door and she was afraid she couldn't leave, the complaint said. Asked about the fire, Kizer said she watched the television show "Criminal Minds" and decided to start the fire. She told detectives she jumped out a window and drove off in the BMW.

Prosecutors charged her with first-degree intentional homicide, arson, car theft and illegal possession of a firearm. She would face a mandatory life sentence if convicted on the homicide count.

Kizer spent two years in jail before she was released in June 2020 after community groups raised her $400,000 bail.

Her attorneys planned to invoke the sex trafficking immunity law at trial but Kenosha County Circuit Judge David Wilk refused to allow it, finding immunity extends only to trafficking-related charges, such as restraining someone, extortion, sex acts or slave labor.

Kizer's attorney, public defender Katie York, persuaded a state appellate court to overturn Wilk's ruling this past June. That court found that immunity applies to any offense that is a direct result of being trafficked.

The state Department of Justice appealed to the state Supreme Court. Assistant Attorney General Timothy Barber argued in briefs that the shooting wasn't a direct result of trafficking because it was premeditated. The day before Volar was killed Kizer texted a friend saying "I'm going to get a BMW" and told her boyfriend she intended to shoot Volar, the prosecutor argued. Kizer's argument that she shot Volar to escape a sexual assault holds no water since she shot him while he was sitting in a chair, Barber added.

"Kizer is asking this Court to interpret (the immunity law) in a manner that creates a broader defense based on trafficking status than someone could assert in any other self-defense context," Barber wrote.

York declined to comment for this story. But she argued in briefs that Wilk's interpretation of the immunity statutes undermines the purpose of the law and Kizer should be allowed to make her case at trial.

Kate Mogulescu, an associate professor of clinical law at Brooklyn Law School who specializes in sex trafficking laws and consulted with one of the parties that filed briefs supporting Kizer, said in a telephone interview that it should be an easy call for the Supreme Court to let a jury consider the context surrounding Volar's death.

"Somehow when it's a trafficking victim that's trying to provide additional information and context to what happened in their case, that shouldn't be allowed? That doesn't make any sense," Mogulescu said.