The Wisconsin DOJ's Division of Criminal Investigation is investigating a fatal officer-involved shooting near 12th and Center in Racine on Friday, May 20.

RACINE, Wis. - The Wisconsin Department of Justice's Division of Criminal Investigation is investigating a fatal officer-involved shooting in Racine on Friday, May 20.

Around 1 p.m., a Racine police officer attempted a traffic stop on a vehicle that was the subject of a search warrant for a felon in possession of a firearm. After a brief chase, police said an armed man got out and ran off.

"The city of Racine has experienced a 49% increase in shots-fired incidents and six gun homicides this year," Racine Police Chief Maurice Robinson said. "In effort to curb the gun violence, Racine police have been executing search warrants on identified vehicles and persons."

During the foot chase, during which police said the officer gave "numerous" commands to stop, the man did not comply – and the officer fired their weapon near 12th and Schiller. The man was hit and taken to the hospital where he was later pronounced dead, according to the DOJ.

"The armed man refused all commands and took an action that resulted in the pursuing officer discharging his service weapon," said Robinson.

The police chief did not specify what that action was, and did not take questions during a Friday night news conference.

No law enforcement personnel were injured. A firearm was recovered. Body camera footage captured the incident and will be turned over to the district attorney's office, according to authorities. 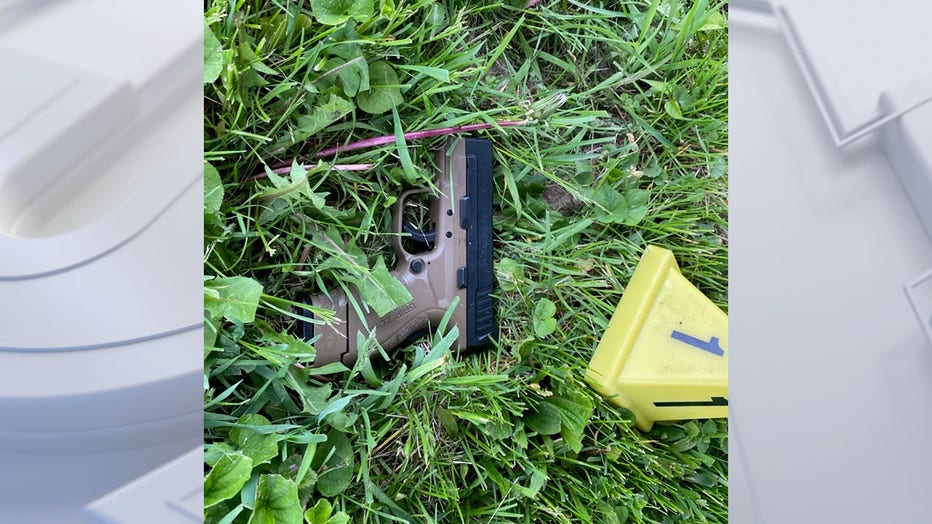 The officer involved has been placed on administrative leave, which is department policy.

The DCI is leading the investigation with assistance from the state crime lab and Wisconsin State Patrol. Racine police were assisted at the scene by Racine County sheriff's deputies and the Burlington Police Department.

Friday's sights and sounds will impact the whole neighborhood.

"I was walking through my backyard, and I heard four quick shots – pop, pop, pop, pop," said Vince, who lives in the area. "Scared the (expletive) out of me.

"It’s getting rough. It’s time for us to start praying."

Scene of officer-involved shooting near 12th and Schiller in Racine

"I was terrified. I ran into the garage. I asked my father to run in there with me in case they were still shooting and I pretty much just hurt my leg," resident Johanna Aleman said. "And then once I ran out of the garage, when I was done running in there, we decided to peak through to see if everyone was OK."

Neighbors told FOX6 News they saw officers try to revive the man after he was shot.

"I could see them resuscitating someone back there on the next street almost for a while," resident Joyce Carothers said.

Carothers also said she has heard a lot that worries her lately and is thinking about the safety of her neighborhood.

"You hear a lot of gun shots around here," she said. "With all this stuff going on, it’s unsafe for the kids to even play outside."