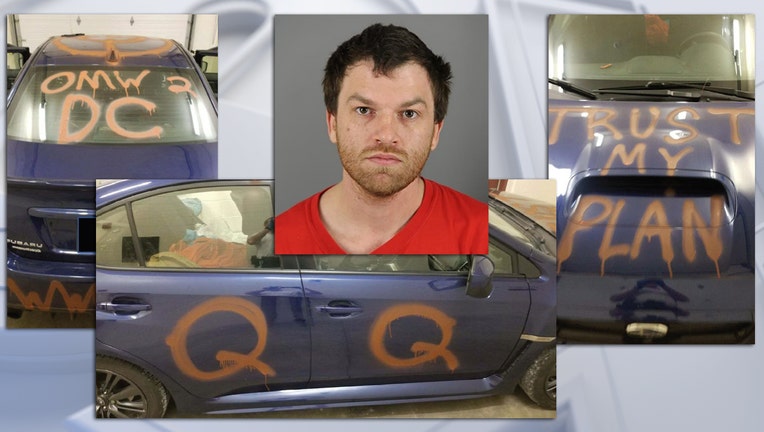 MILWAUKEE - A QAnon conspiracy believer charged with allegedly attacking two uniformed soldiers outside a federal facility in Pewaukee in March will plead guilty in the case, according to a plea agreement filed in Milwaukee federal court.

Ian Olson, 31, of Nashotah, was charged in both state and federal court for the attack. A plea agreement filed Monday, August 2, in the federal case indicates he will plead guilty to the charge of attacking the soldiers. A second count of resisting will be dismissed at sentencing.

Olson is set to appear before Federal Judge Brett Ludwig for a change of plea hearing on August 18. Olson faces a maximum sentence of two years in prison, a $10,000 fine, plus a year of supervised release, at the time of sentencing.

The married, father of two, with no criminal history was arrested after he was tackled by uniformed Army reservists standing in a parking lot of the US Army Reserve Center, 619 W. Wisconsin, in Pewaukee on March 15.

According to a federal criminal complaint, Olson got out of his vehicle – which is spray-painted with QAnon slogans – and shouted "This is for America" while carrying what appeared to be a rifle. It was an orange AR-15-style paintball gun. Olson allegedly shot two or three paintballs at the soldiers, who were about 15 yards away.

QAnon is a convoluted, evolving, and shifting pro-Trump conspiracy theory centering on the baseless belief that former President Donald Trump is waging a secret war against the so-called "deep state," a child sex trafficking ring run by cannibals and satanic pedophiles and that the former president will be re-installed to office.

Olson has remained in custody after federal prosecutors argued he posed a serious threat to the community after allegedly saying he would cause a "mass casualty" event if released. Olson also faces state charges in the case.

During intake at the Waukesha County jail, Olson said he just returned from Washington, D.C., where he "attempted to deliver a message," according to federal court filings. His vehicle is spray painted with several QAnon slogans, as well as "OMW 2 DC" and "Trust My Plan."

Olson also made other alarming statements to law enforcement at the time saying he would be "taken over by the Spirit of Christ and lead the people to unity," according to the criminal complaint. USCP found Olson to be a danger to himself. He was admitted to a psychiatric ward for evaluation, released with medication, and later returned to Wisconsin.

USA Triathlon is heading back to Milwaukee’s lakefront for the 2021 Toyota Age Group National Championships.

While airports never stopped requiring masks, many retailers did. Now, some are shifting gears as the COVID delta variant spreads.