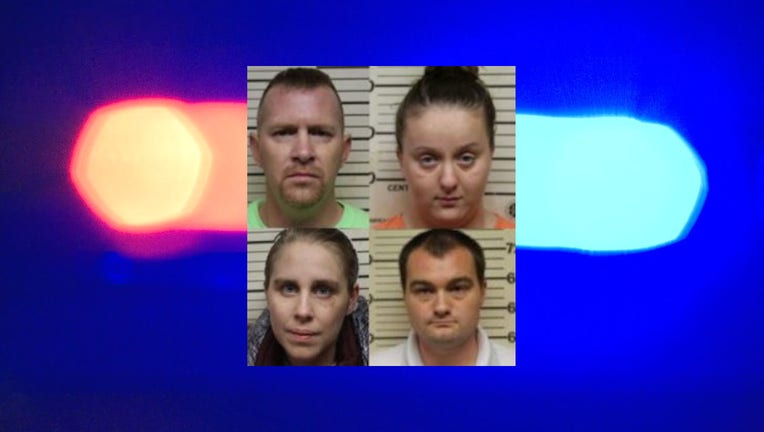 Mary S. Mast, 29, and James A. Mast, 28, both of Lincoln, Missouri, were charged Thursday with felony child endangerment resulting in death and are jailed without bond. They don't yet have attorneys.

The couple's other children, a 2-year-old son and an infant, were placed in protective custody, Benton County Sheriff Eric Knox said in a news release.

The 4-year-old girl was found dead at the family home on Dec. 20. Knox said she had been severely beaten and dunked in an icy pond as part of what appeared to be a "religious-type episode."

Across-the-road neighbors Ethan Mast, 35, and Kourtney Aumen, 21, were charged last week with second-degree murder and other offenses. Both are jailed without bond. Ethan Mast is not believed to be related to James and Mary Mast, Knox said.

Both families attend the same church, but Knox said that the actions involving the girl are not condoned by the church, which he declined to name.

"The investigation done so far indicates that this is an isolated incident and NOT the actions of a cult," Knox wrote in a news release on the department's Facebook page.

A probable cause statement from Benton County Sgt. Chris Wilson said the girl was already dead and had "severe purple bruising" over her body, along with ruptured blisters, when he was called to the home.

Knox said the girl’s parents also had been beaten along with the 2-year-old. The infant was unharmed.

James Mast told investigators he and his wife observed the beating of their daughter but were told they would be beaten or shot if they tried to intervene.

Still, Wilson asked James Mast "how he could let people do this to his family and he stated they were told (his wife) had a ‘Demon’ inside her and her children would end up just like her if it was not taken care of," Wilson wrote in the probable cause statement.

Ethan Mast told investigators that he and Aumen used a leather belt to beat the girl on Dec. 19, the statement said. She was then taken to a pond behind the home where she was "dunked" in the water on a day when high temperatures were in the 40s.

Ethan Mast said everyone then returned to the victims’ home. It wasn’t clear when the child died.