The typically reliable Crosby missed potential winners with 2:12 and then 3 seconds left in regulation and missed another attempt in overtime before finally winning it. Heading into the game he was 44 of 46 on field goal attempts since the start of the 2019 season.

Crosby, who missed an extra point earlier in the game and also made three field goals, came in having converted all six field-goal attempts and 11 PATs this year.

The Bengals' Evan McPherson also missed on shots that could have won the game, with 26 seconds left in regulation and again in overtime.

The Bengals (3-2) tied the score late in the fourth period. Ja'Marr Chase made a nice catch on third-and-6 from the Packers 36 for 19 yards, and two plays later Joe Mixon bounced right for an 8-yard touchdown run. Joe Burrow hit Tee Higgins in the back of the end zone for the 2-point conversion with 3:27 left.

Crosby was set up for a 36-yard shot with 2:12 left but pulled it left. The Bengals drove to the Packers 47 but McPherson's field-goal attempt bounced off the right upright with 26 seconds left. Then it was Crosby's turn to miss again: His 51-yard attempt, set up by a 20-yard pass from Aaron Rodgers to Davante Adams, was again pulled wide left.

In overtime, Burrow, who was taken to a hospital as a precaution with a throat contusion after the game, was intercepted by linebacker De'Vondre Campbell, but Crosby missed his third straight, again wide left.

McPherson got another chance with a 49-yarder and was celebrating with holder Kevin Huber before the wind pulled it just left of the upright flag.

Rodgers threw two touchdown passes to move into fifth place on the all-time list. Adams had 11 catches for a career-high 206 yards.

Rodgers threw a 12-yard TD pass to AJ Dillon in the first quarter to tie for fifth place all-time with Philip Rivers. His 5-yard scoring toss to Adams in the second quarter put him ahead of Rivers. He finished 27 for 39 for 344 yards and an interception as the Packers (4-1) won their fourth straight since losing the opener to New Orleans.

The Bengals got two touchdown passes from Burrow, who was 25 for 38 for 260 yards and also took a beating from the Green Bay defense. He threw scoring passes to Samaje Perine and Ja'Marr Chase.

Crosby's 44-yard field goal and the Rodgers-to-Adams hookup made it look as if the Packers would take a 16-7 lead at the half. The Bengals got the ball with 1:07 left and on the second play the scrambling Burrow lofted a long pass in the direction of a streaking Chase. Safety Darnell Savage was in position to knock it way, but he whiffed and Chase took it in for a 70-yard touchdown. 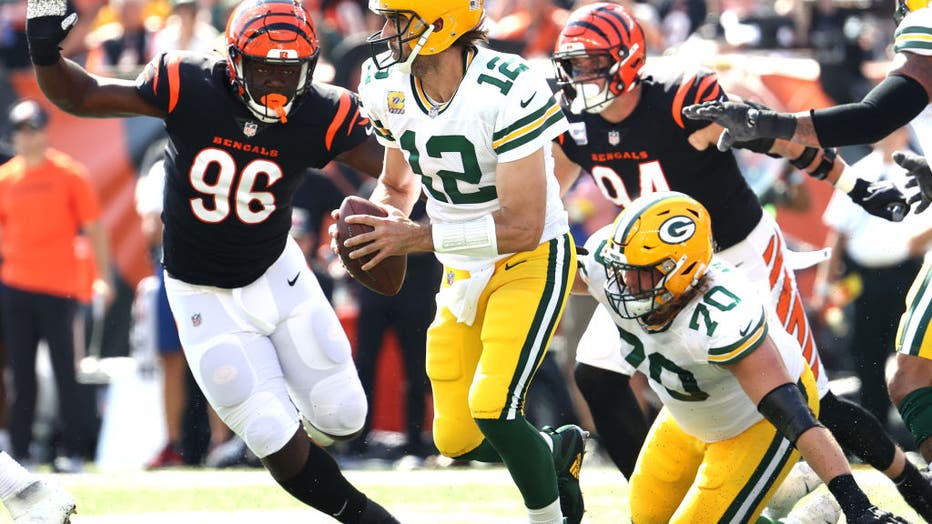 CINCINNATI, OHIO - OCTOBER 10: Aaron Rodgers #12 of the Green Bay Packers scrambles to avoid a tackle by Cameron Sample #96 of the Cincinnati Bengals during the first quarter at Paul Brown Stadium on October 10, 2021 in Cincinnati, Ohio. (Photo by An

The Packers started off with a six-play drive, ultimately punting.

The Bengals couldn't capitalize on their next drive, punting with 9:39 left in the first.

The Packers started their second drive on the GB 32. A 15-yard catch by Cobb was followed by a Rodgers interception, making it Bengals ball on the GB 42.

Cincy couldn't score on the takeaway and punted to the end zone with 7:19 left in the first.

A 10-play drive brought the Bengals into the end zone with a Perine 4-yard run; 7-0 Cincinnati.

Rodgers opened the drive with a 17-yard completion to Davante Adams, with the ball on the GB 42.

A 10-play, 75-yard drive landed the Pack in the end zone in Dillion's hands. Crosby missed the extra point off the upright, leaving the Bengals with a slight lead, 7-6 and 11:49 left in the half.

The Packers' six-play drive ends with a 44-yard field goal by Crosby, with the Pack up 9-7.

A 43-yard return from the Bengals on the kick but the ball at the 40 with 7:17 left in the half. The Bengals' punt after a rush from Burrow was short. Burrow took time after the tackle and was seen in the medical tent.

A handful of runs by Dillon and an epic catch by Adams brought the Pack to the 13. An 8-yard run by Aaron Jones made it first and goal on the 5-yard line.

A 5-yard pass to Adams in the end zone was a touchdown for Green Bay. With Crosby's extra point, it was 16-7 Packers.

Burrow started the third quarter with an interception and it was Packers' ball.

After three drives in the third, the Bengals punted after 10 plays.

Key Stat: D. Adams has 10 receptions for 186 receiving yards and one receiving TD.

Kevin King was injured in a tackle with 8 minutes left in the game.

Cincy was first at the GB 17-yard line after a Burrow to Chase catch with 4:23 left in the game; the Packers leading by 8 points.

J. Mixon scored on a run for the Bengals, making it 22-20 Packers ahead of a 2-point conversion attempt.

Bengals converted to tie the game at 22 with 3:27 left in the game.

An epic throw by Rodgers was followed by a catch and run by Aaron Jones for 57 yards at the Cincy 17 with 2:20 left.

At fourth down, the Bengals set up for a 57-yard FG attempt. The Packers used their last time out with :26 in the game.

McPherson hit the right upright and missed, and the game remained tied.

With no timeouts, the Packers took to field goal range and stopped the clock.

Crosby came out to attempt a 51-yard FG – and missed.

The Bengals won the toss and Burrow seemingly threw intentionally to the Packers for an interception.

With the Packers on the 17-yard line, the next score would win. Mason Crosby came out to kick a FG on third down and missed again, making for four missed field goals in the last two minutes of play.

McPherson warmed up for a 49-yard attempt on fourth down – and missed, making for five missed field goals since the 2:12 marker in the fourth quarter.

With the next score winning the game and the Packers on the 41-yard line, second down, Rodgers was sacked.

Then came Randall Cobb with a huge play; a catch on the 32-yard line. Ball placement was under review; 4th and inches; Rodgers going for it.

Crosby came out for a 49-yard attempt – which was good! The Packers won 25-22 in overtime.

Milwaukee Brewers fans hope the ''Claws Up!'' mentality will help lead them past the Atlanta Braves and to the World Series.