Homeland Security Secretary Alejandro Mayorkas appeared before the Senate Appropriations Committee on May 12, 2021, and testified about domestic violent extremism in the U.S. and the resources being dedicated to the issue.

WASHINGTON - A New Jersey man believed to be a member of the Oath Keepers was arrested for allegedly participating in the violent pro-Trump Capitol riot that took place on Jan. 6, the U.S. attorney’s office for the District of Columbia announced on Thursday.

James Breheny, also known as Seamus Evers, 61, of Little Ferry was charged with federal offenses that include "violent entry and disorderly conduct; entering and remaining in a restricted building with intent to disrupt government; obstruction of an official proceeding; and corruptly altering, destroying or concealing evidence," according to the U.S. attorney’s office.

Breheny is also allegedly a member of the Oath Keepers, "a large but loosely organized collection of individuals, some of whom are associated with militias – and served as Bergen County Coordinator for the New Jersey chapter," the U.S. attorney’s office said. 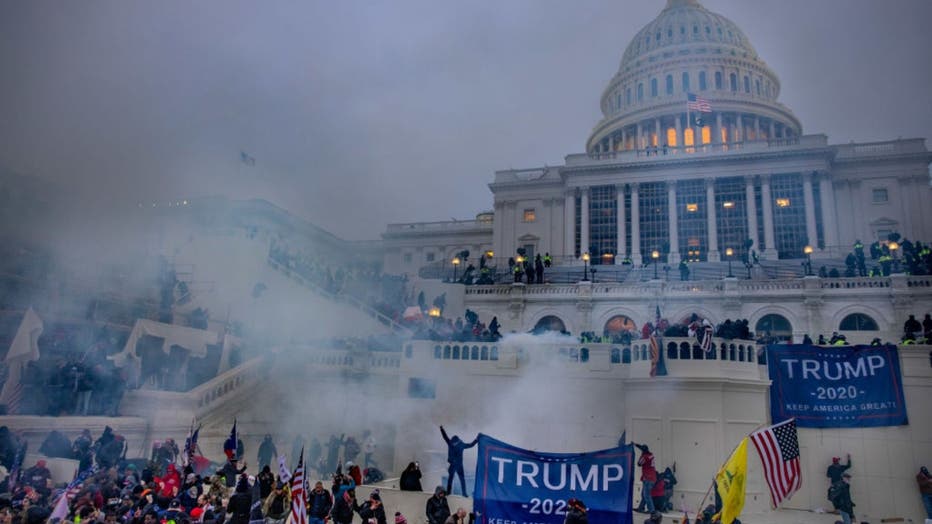 Oath Keepers "is one of the largest radical antigovernment groups in the U.S. today. While it claims only to be defending the Constitution, the entire organization is based on a set of baseless conspiracy theories about the federal government working to destroy the liberties of Americans," according to the Southern Poverty Law Center.

Court documents revealed that on the morning of Jan. 6, Breheny was in a group chat titled "DC Op: Jan 6 21" on Signal, which is a messaging system capable of encrypting conversations in order to keep communications private, according to the company’s website.

In the messages between Breheny and other participants, he allegedly said he would be "coming in with a team from NJ, and who also has contacts with several militia leaders coming in," according to the U.S. attorney’s office.

Footage obtained by the Federal Bureau of Investigations allegedly showed Breheny in close proximity to the ongoing violence against Capitol law enforcement officers.

"Videos taken by members of the public as well as closed-circuit television from the U.S. Capitol show Breheny willfully entering the Capitol, and inside the rotunda," said the U.S. attorney’s office.

During investigations following the Capitol siege, FBI agents tracked down Breheny on Jan. 14 and asked him whether or not he forcefully entered the Capitol building. Breheny denied any willing involvement and said he was pushed inside during the riot on Jan. 6, according to the FBI.

"Breheny also told law enforcement he did not see who opened the U.S. Capitol doors, nor how those doors were opened, and that he did not know he was not allowed inside the Capitol," the U.S. attorney’s office continued.

Upon further investigation, agents were able to find Breheny’s phone, which contained text messages that read, "I breached the Capitol door!" and "Made it in Brother," as well as, "I have to clear chats."

"His phone also contained texts from associates that read, ‘They’re going through social media looking at pictures to try to identify and prosecute anyone in the Capitol building,’ and ‘Delete all pictures, messages and get a new phone. Praying for you brother,’" court documents revealed.

Following his alleged involvement in the Capitol insurrection, on Jan. 8, Breheny deactivated his Facebook account but investigators were able to find he had "transmitted photos from the Jan. 6 riots on the account and made various statements about the riots on the account," the U.S. attorney’s office said.

Breheny made his first court appearance on May 20.

Breheny’s case is being prosecuted by the U.S. Attorney’s Office for the District of Columbia and the Department of Justice National Security Division’s Counterterrorism Section.

The FBI has arrested more than 440 individuals who took part in the Capitol riot, which left five people dead. Of those 425 arrests, 125 were charged with assaulting law enforcement officers.

Investigations into the Capitol riot are ongoing and anyone with information can contact the FBI by calling 1-800-CALL-FBI (800-225-5324) or visiting https://tips.fbi.gov/.