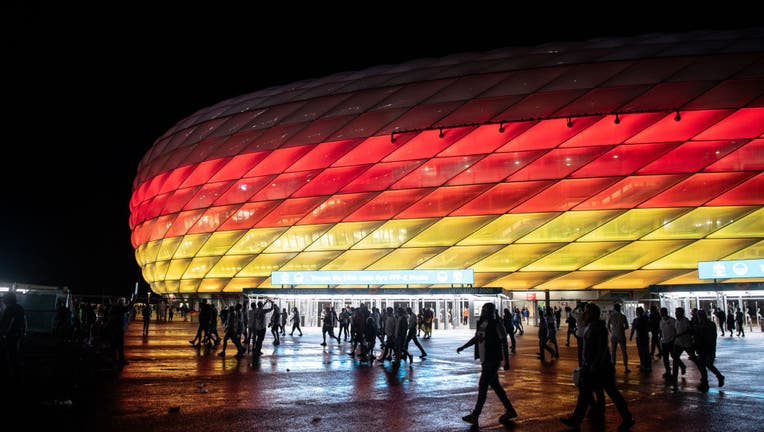 EM Arena Munich: Fans leave the stadium, which is illuminated in the national colours of Hungary and Germany. (Photo: Matthias Balk/dpa (Photo by Matthias Balk/picture alliance via Getty Images)

Football is coming to Europe. American Football, that is.

The National Football League announced on Wednesday that Munich, Germany has been chosen to stage the first-ever regular-season game during the 2022 season.

Picking a city was met with a highly competitive application process, according to the NFL. After a long and arduous scouting journey, FC Bayern Munich Stadium was chosen as the venue for two of the four International Series games to be played in Germany over the next four years.

"We are very pleased to welcome Munich and Frankfurt to the NFL family and are excited to reward our fans in Germany for their passion by bringing them the spectacle of regular-season NFL football," said NFL Commissioner Roger Goodell. "We look forward to staging our first game in Germany at FC Bayern Munich's fantastic stadium later this year and to exploring areas of broader collaboration with the Bundesliga."

The regular-season game in Munich will be one of five international games staged in 2022 by the NFL. Another game will be held in Mexico as well as three in the United Kingdom.

The NFL says home teams for international games will be announced in the coming weeks. These announcements will include dates and matchups.

Dieter Reiter, the Lord Mayor of Munich, expressed excitement over the games saying many residents are already fans of the sport.

"We are very pleased to welcome the NFL International Series to Munich. It is a great honor for the state capital Munich to be the first German city to stage a regular-season NFL game. Many Munich residents are big football fans and they will be thrilled that this spectacular sporting event is coming to their city," Reiter said.

The league has expanded its horizon in Europe after years of only playing games that count in England. The 2022 game will be part of a four-game series played abroad that also will include games in London.