More than a hundred animals were rescued from a far West Valley homeless encampment, and now, these dogs are in need of a fur-ever home. FOX 10's Irene Snyder reports.

CAVE CREEK, Ariz. - Nearly 150 dogs were rescued from a homeless camp in Arizona - and it was one of the people living there that called for help.

The dogs, ranging in age from two days old to 17 years old, were surrendered to Sky Sanctuary Rescue in Cave Creek and to the Maricopa County Sheriff's Office. The sanctuary took 50, while the county took the rest.

The owners were a family that had become homeless, and they were living with dozens of pups in the desert.

They had asked the sanctuary for help after their camp was destroyed by recent monsoons. 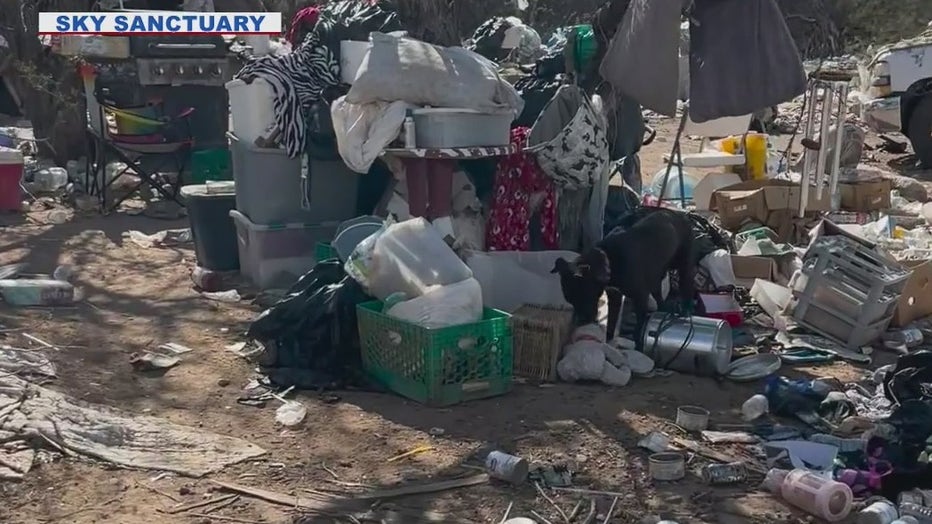 "It’s not often that members of the transient community reach out begging for help but when this family ended up homeless, in the brutal heat of the desert with the 150 animals they were so desperately trying to keep alive in the Arizona monsoons, we knew we had to help," read a Facebook post from Sky Sanctuary.

Smith says the dogs were well-fed, each had a name, and when the owners surrendered them, she could see that it tore them apart.

"Surprisingly enough, you could see they did the best with what they had to really take care of the animals, especially living in these conditions," Smith said. "I think that was their comfort…knowing they had their animals, so knowing after we left and took the animals that they were out there in the silence in the desert by themselves, it's really sad."

Now, all these animals are looking for new homes, including the senior dogs that are starting to get much needed medical care.

All the dogs have been rescued, but in the beginning, Elli said she prioritized those seniors for her sanctuary.

"Like which animal is most likely to die in the shelter because the shelter can't afford medical care?" Smith said. "Those are the ones we chose."

The dogs will be available for adoption, and some of them are available for pre-adoption right now. The shelter is also expanding and is asking for donations to keep them going.