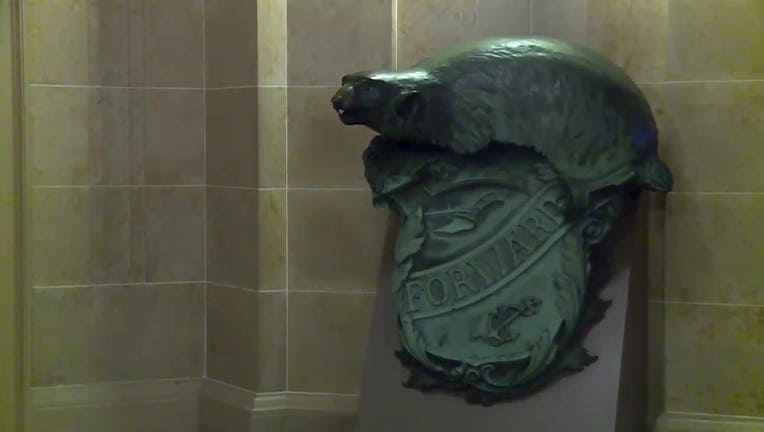 Badger statue at the Wisconsin Capitol outside the governor's office

MADISON, Wis. - The Navy will let Wisconsin keep its beloved badger statue for 50 more years, scrapping plans to move the sculpture to an East Coast museum.

The statue, sculpted from melted-down cannons seized from Cuba during the Spanish-American War, was affixed to the first USS Wisconsin before World War I. The U.S. Naval Academy Museum lent it to the state in 1988. It has sat outside the governor's office in the state Capitol since 1989, delighting thousands of tourists who rub its nose for good luck.

The academy museum contacted state officials in March 2020 asking for the statue's return so it could be lent to the nonprofit Nauticus Museum in Norfolk, Virginia, where the second USS Wisconsin is berthed as an exhibit.

State historians balked, and U.S. Rep. Mike Gallagher, a Wisconsin Republican and former Marine, joined the effort to keep the statue in Madison. The Navy last February agreed to extend the loan for two more years.

"The Badger should remain in Wisconsin where it is seen by tens of thousands of visitors each year and is one of the most popular and beloved attractions in our beautiful state Capitol building," Evers wrote. "The Badger is not only part of the USS Wisconsin ... history, but it is now a part of the history of the Wisconsin State Capitol and a piece of pride for the Badger State and of residents from every corner of Wisconsin."

Del Toro sent Evers a letter Tuesday saying the Navy is happy to extend the loan for the next 50 years.

"I prize the strong affinity that the citizens of Wisconsin have developed toward the badger statue; it reflects the state's proud maritime heritage and deep ties to the U.S. Navy," Del Toro wrote. "The Navy feels those ties, too, and we thank the people of Wisconsin for their ongoing interest in and support of our Navy and our nation's maritime history." 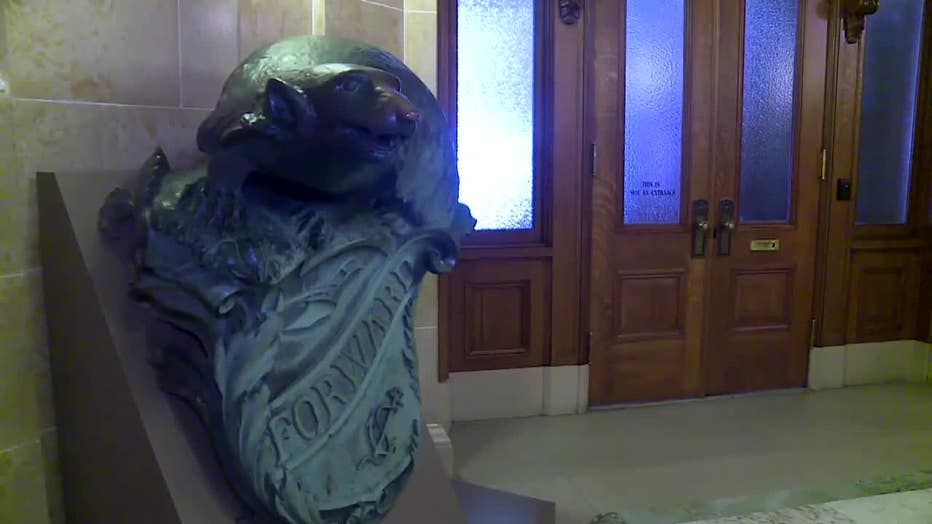 Badger statue at the Wisconsin Capitol outside the governor's office

Marinette Marine manufactures battleships for the Navy. In 2020 the company won a $5.5 billion contract in 2020 to build a guided missile frigate and was selected to develop a prototype for a new unmanned ship capable for attacking land and sea targets.