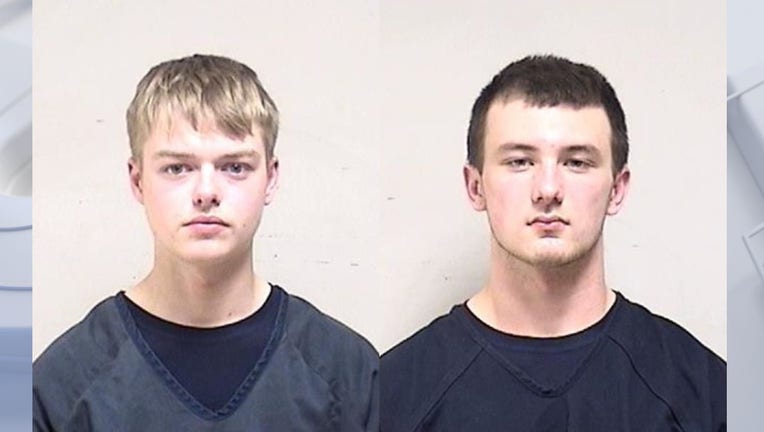 KENOSHA, Wis. - Two Kenosha County men have been charged with second-degree recklessly endangering safety and attempting to flee or elude an officer. This, after they led police on a pursuit Thursday morning, May 13. The accused are Joshua Brey, 20, and Bradley Krok, 19.

According to the criminal complaint, at approximately 6:20 a.m. on May 13, dispatch received a call regarding two individuals on motorcycles driving recklessly. The caller stated that as he left work that morning from the industrial park in Pleasant Prairie along State Highway 31 he observed two motorcycles traveling northbound on Highway 31 at a high rate of speed.

The caller stated that neither motorcycle had registration tags displayed – and that they were weaving in and out of traffic.

A deputy responded to the area of Highway E and Highway 31 in the City of Kenosha. Upon arrival, he could hear the acceleration of two motorcycles to the south. He then observed two motorcycles with red and blue lights flashing about a quarter of a mile behind them.

The deputy then joined a Wisconsin State Patrol squad in pursuit of the motorcyclists. The deputy and the state patrol squad obtained speeds in excess of 100 miles per hour during the pursuit, according to the criminal complaint.

The deputy reports as they passed Highway JR, he observed the motorcyclists weaving in and out of heavy traffic as they were passing Highway A, still in excess of 100 miles per hour. Due to upcoming road construction, the deputy terminated the pursuit.

According to the complaint, as the deputy continued northbound he observed both motorcycles were stopped near Highway KR and Highway 31. Upon arrival, the deputy observed the lead driver, identified as Bradley Krok, had damage to the right side of his motorcycle, scuffs on his jacket and helmet. Krok indicated that he had crashed. Rescue was called as a precaution to check for injuries.

When the deputy asked Krok why he fled, he advised that he didn't know and stated "because I'm a (expletive) idiot." The complaint indicates Krok apologized several times, then stated "he didn't want to do that at all, sir," insinuating that he was the reason he and Joshua Brey fled.

Brey told authorities that he and Krok had both just got off from work and had a "very stressful day" and that they were "just trying to blow off some steam." Brey admitted they saw the red and blue flashing lights behind them.

The Wisconsin State Patrol Inspector stated that when he was attempting to catch up to Krok and Brey, he was traveling in excess of 100 miles per hour and the motorcycles were still creating distance.

A crash in Racine leaves two children and two adults injured. The driver of a vehicle involved is arrested – and police suspect alcohol to be involved.