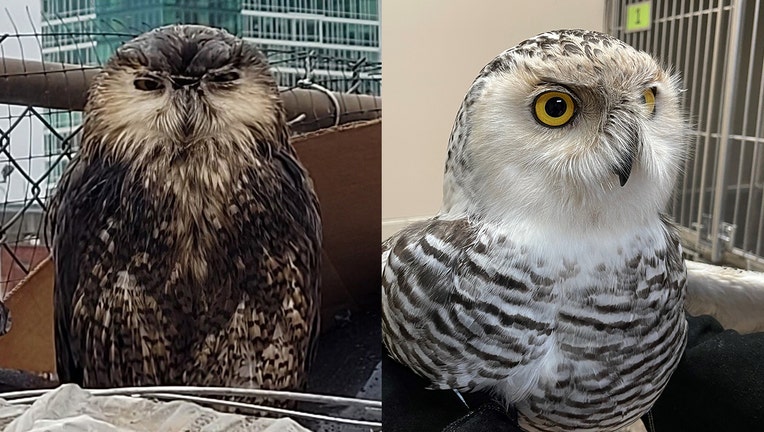 The WHS Wildlife Rehabilitation Center received a call Friday about the large bird. When the caller sent an image, staff immediately recognized the very dirty snowy owl and sent a rescue volunteer to bring it in for rehabilitation.

During an initial exam, staff found the owl was covered in diesel and an oil-based substance. The contaminants had rendered the bird hypothermic, and the animal had been ingesting the substance in an attempt to clean itself. As a result, the WHS said the owl was in respiratory distress.

The snowy owl would not have survived with human intervention, the WHS said; the bird was "incredibly weak" and needed to be stabilized. Rehabilitation workers bathed the bird, removing most of the contaminants from the feathers and skin. Now much cleaner, the owl will still need one final bath to get the last bit of oil out and will be treated for additional injuries and abrasions.

The owl’s prognosis is still guarded, the WHS said, but it started to eat on its own and is beginning to show appropriate wild animal "sass and attitude" toward caretakers.

Snowy owls breed as far north as the Arctic Circle but do occasionally migrate south – including to Wisconsin – during winters. The WHS said there is still much to be learned about the species, but Wisconsin wildlife rehabilitators do know from experience that this species – especially first-year birds – are often inexperienced in the hyper-urban environment of the city and can sometimes find their way into trouble.

Construction has officially begun at the Ice Castles in Lake Geneva. Freezing temperatures this week have allowed crews to begin growing icicles.

Wild Lights At The Zoo starts up again

This holiday season you can stroll through the Milwaukee County Zoo’s very own snow globe, and take in some glowing displays, tasty food, and beverages.