The Milwaukee Police Department and FBI are asking for the public's help in obtaining any electronic media that may assist in the investigation in the Water Street and Highland shooting on Friday night.

MILWAUKEE - The Milwaukee Police Department and FBI are asking for the public's help in obtaining any electronic media that may assist in the investigation in the Water Street and Highland shooting on Friday night, May 13.

Officials said 17 people were injured, and 10 were arrested in the incident. It happened a couple of hours after the Milwaukee Bucks game – not far from Fiserv Forum and the Deer District.

It was one of three shooting incidents in the broader downtown entertainment district that night; in all, 21 people were wounded and 11 were arrested.

"This behavior will not be tolerated not only downtown but nowhere in the city. Period. We are not going to accept this behavior as any new normalcy in regards to our community," Police Chief Jeffrey Norman said Tuesday.

Eleven guns were recovered, Norman said. Nine of those guns were fired Friday. Some of the people who were arrested were prohibited from owning guns, and some of the weapons were bought through straw purchasers.

Shooting incident at Water and Highland captured by surveillance camera

Shooting incident at Water and Highland captured by surveillance camera.

Officials shared surveillance video from the area. It showed two groups approach Water and Highland. One person pulled up his shirt and showed a pistol – causing the second group to pull their weapons – and gun fire was exchanged. People in the immediate area ran for cover.

Norman said at this time, it is not known if there is any gang connection to this shooting incident.

Shooting at Water and Highland, Milwaukee

To help identify those responsible for the violent acts, the MPD and FBI are now accepting tips and digital media – such as video, photos, social media posts and more – depicting the shooting on Water Street. You may also call 1-800-CALL-FBI (800-225-5324) to verbally report tips and/or information related to this investigation.

Milwaukee Mayor Cavalier Johnson said on Tuesday that the city will begin to vigorously enforce the curfew that is already on the books.

That means anyone under age 16 and under must be off the streets, out of public spaces, by 11 p.m. on weekends and 10 p.m. on weekdays.

Signs will be installed to inform people that police will be enforcing the curfew.

"I do not want one citation issued. Don't want one child be taken into our possession," Norman said, "but if it means we have to step up and do it because someone else is not, guarantee it. I expect it – and it shall be done."

The mayor said more police will be deployed in downtown Milwaukee to help with this enhanced enforcement, as well as in other neighborhoods.

"It's not simply a downtown strategy. The curfew will be enforced, police enforcement will be adjusted in neighborhoods across out entire city," said Johnson. "Our path forward to a safer Milwaukee requires everyone to join in partnerships – like the partnerships you see here today before you. Just standing on the sidelines is not an option – it's not an option for anybody.

"The increase in gun violence we've seen as the weather has warmed up, not just last weekend but a couple weekends before that, cannot continue."

Both Norman and Johnson on Tuesday stressed the importance of parents in making sure the city is safe.

Milwaukee Police Chief Jeffrey Norman talks about parents' role in the city -- and its attempt to combat gun violence.

Milwaukee Mayor Cavalier Johnson stresses the importance of parents when tackling gun violence in the city. 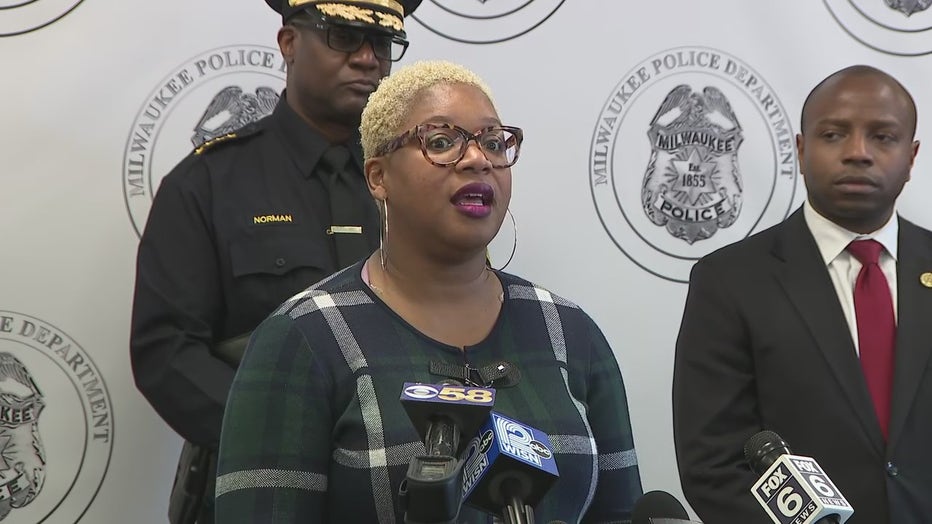 "We are also doubly committed to making sure that we are using every extent of our resources and capacity to make sure that our city looks different," said Arnitta Holliman, Director for Milwaukee's Office of Violence Prevention. "While there is absolutely not place whatsoever for violence, for gun violence in our city, there absolutely is a place for everyone to step up and get involved."

The Office of Violence Prevention will host a community forum on violence next Tuesday, May 24. It will be held at 5:30 p.m. at the University of Wisconsin-Milwaukee's Zilber School of Public Health.