MILWAUKEE - Three people have been charged for their alleged roles in intentionally causing a crash, assaulting a man and stealing a vehicle, then fleeing the scene on June 5.

Samuel Dickerson Jr., Elizabeth Williams and Erma Bowie are all charged with multiple counts. There were children present as the incidents unfolded. 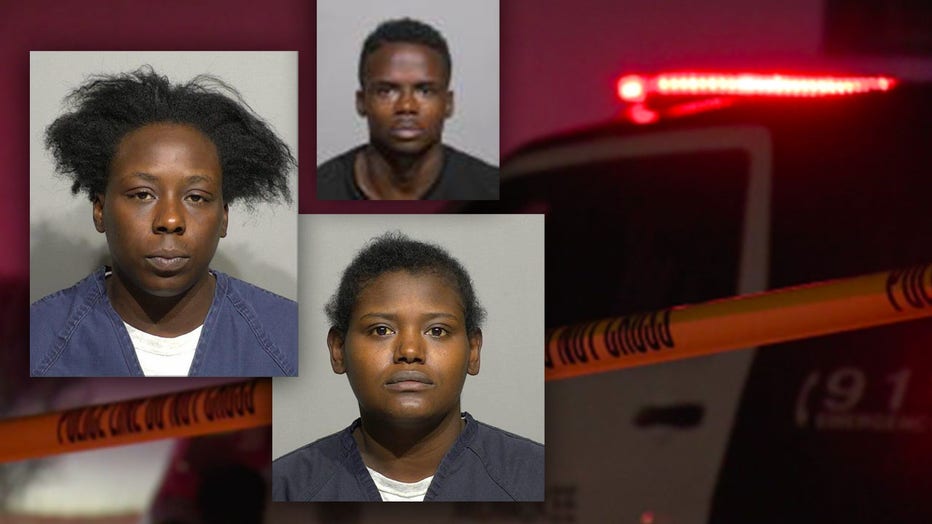 Milwaukee police responded to a three-vehicle crash near 76th and Congress on June 5.

A witness told police that she saw a man limping from a car with a child in each arm. The witness described the children as "crying and screaming in pain." The complaint states the witness yelled to the man "take those babies to the hospital" but he hopped in a van and fled.

A responding officer checked the car and found blood, pacifiers and diapers in the back seat. There were no properly secured car seats inside, according to the complaint.

Police later spoke to one of the crash victims. It was later determined that he and two women were involved in a fight at an assisted living facility. He left after the fight – but noticed a vehicle following him. The complaint states the vehicle sped up behind him. He said he intentionally drove into oncoming traffic to avoid the vehicle, but it didn't work and the vehicle crashed into him.

The complaint states a woman and a man began to assault the victim. The victim described being put in a chokehold by the man at one point. When the assault stopped, one of the people fled in the victim's vehicle.

Later, a woman arrived at Children's Wisconsin stating that her children were injured in an accident. The woman allegedly matched the description of a woman involved in the assault and was identified as Williams. Williams arrived at the hospital with a man, since identified as Dickerson.

Williams said she stayed on the phone with Bowie and caught up to the eventual assault victim near 76th and Hampton and the cars came to a stop near 76th and Congress. The complaint states Williams said Dickerson got out of the car, chased the victim and there was a fight.

According to the complaint, Williams said Bowie got in the victim's vehicle and, eventually, Williams got in Bowie's vehicle and Dickerson got into Williams' vehicle. They started to flee, but Williams looked back and saw Dickerson had gotten in an accident. She said she drove around looking for Dickerson and the kids, but couldn't find them.

The three later met at Bowie's house. According to the complaint, Bowie arrived without any clothing and was bleeding. The three eventually went to Children's Wisconsin together.

A warrant was issued for his arrest on June 10.

Both women are scheduled to make preliminary court appearances on June 21.