With a slide rule and a pencil, Katherine was responsible for calculating orbital trajectories of numerous space flights, including Alan Shepard, the first American in space and the Apollo 11 flight to the Moon. (Source: NASA TV)

FAIRFAX, Va. - Sydney Lanier’s name sat atop a Virginia middle school for 60 years, but not anymore.

"The message to our middle school students is, ‘Eagles can soar beyond these earthly skies at Katherine Johnson Middle School," City school board member Toby Sorensen said in a November news release.

Johnson is best known for conducting NASA’s calculations for Project Mercury — which propelled astronaut John Glenn into orbit. She later calculated America’s path to the moon in the Apollo missions.

The 2016 film "Hidden Figures" is loosely based on her career, as well as the careers of Dorothy Vaughan and Mary Jackson.

Lanier was a 19th-century poet who fought as a private in the Confederate army. Many former Confederate states still have schools bearing his name. 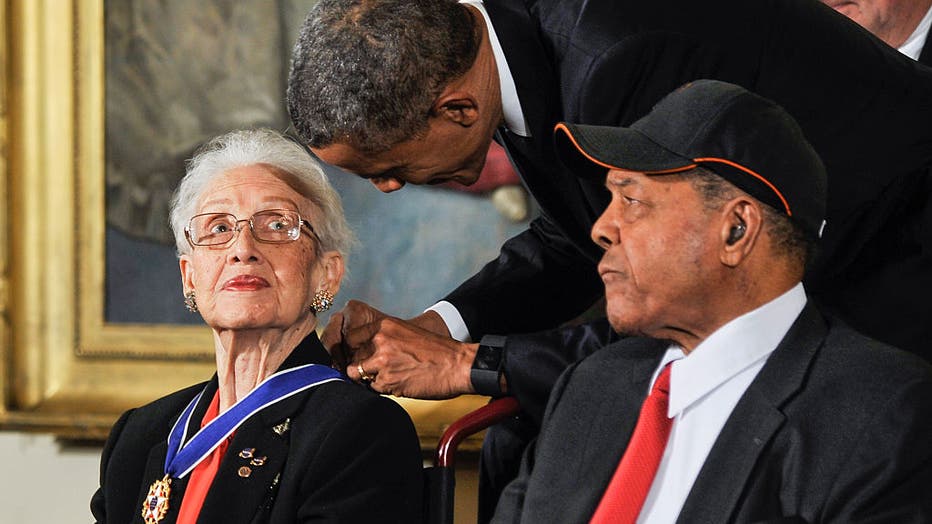 Mississippi even changed its flag, which had still featured the Confederate battle flag in the top-left corner.

The school board spent three months last year gathering community input. They found 86% of the city wanted Lanier’s name removed from the school.

On Sept. 14, 2020, the board voted to change the name. The community recommended more than 300 alternatives to Lanier, which were narrowed down to six the following month.

Other names under consideration were Maya Angelou, Legacy, Fairfax Woods, Independence and City.

Ultimately, the school board voted unanimously last November in favor of Johnson. She retired after 33 years at NASA. In 2015, President Barack Obama awarded her the Presidential Medal of Freedom — the country’s highest civilian honor.

School board officials hope Johnson’s name and legacy inspire all students who walk her halls.

"Her contributions continued to serve the nation and helped ensure that the ‘Eagle had landed…and landed safely," City school board member Jon Buttram said. "So, I think it appropriate that the name Katherine Johnson for our middle school will inspire new generations of ‘Eagles’ for our community, and I look forward to watching them fly."