The Menomonee Falls Police Department is looking for a man who allegedly tried to smash a jeweler's display case with a brick on Wednesday, June 1.

MENOMONEE FALLS, Wis. - The Menomonee Falls Police Department is looking for a man who allegedly tried to smash a jeweler's display case with a brick on Wednesday, June 1.

According to police, the suspect went into the Kay Jewelers off of Falls Parkway just before 1 p.m.

The suspect is described as 5 feet, 7 inches to 6 feet tall with a medium build and "medium skin tone." He has tattoos on his right arm and a beard.

Police are hoping the public comes forward and helps identify the suspect who is on the run nearly two months since the incident.

Shoppers FOX6 spoke with say they are disturbed knowing he is still out there.

It’s the kind of video that leaves you speechless.

"I don’t even know what to say. I’ve never seen anything like that," said Tina Grubor.

Menomonee Falls police are releasing new video of an attempted robbery at kay jewelers off of falls parkway.

Surveillance shows a man walking into the store on June 1st.

He repeatedly smashes the case using a single brick.

He is then chased away by a store employee and leaves empty-handed.

"It’s pretty aggressive and the fact that he just kept going and going and he’s not afraid," said Grubor.

Nearby shoppers are disturbed knowing the suspect is still out there.

"Who knows where he’s been and where he’s going to do this again," said Tina Grubor.

Police only recently received a copy of the surveillance footage. The department says requests for the video are pouring in. .

"The video has become popular if not viral," said Captain Gene Neyhart.

He is not surprised the video has captured high public interest.

"I think, sometimes when you have a crime committed midday, a blatant offense like that is always concerning to the public," he said.

Captain Neyhart says someone out there knows the suspect’s identity. He encourages anyone with information to reach out to the department.

"We’d still like to find out who this is and make an arrest," said Neyhart.

Thankfully, no one was injured during this attempted robbery.

The suspect reportedly drove off in a tan Chevrolet Malibu with no affixed license plates.

Efforts to reach the jewelry store or their corporate spokesman for comment on this incident were unsuccessful. 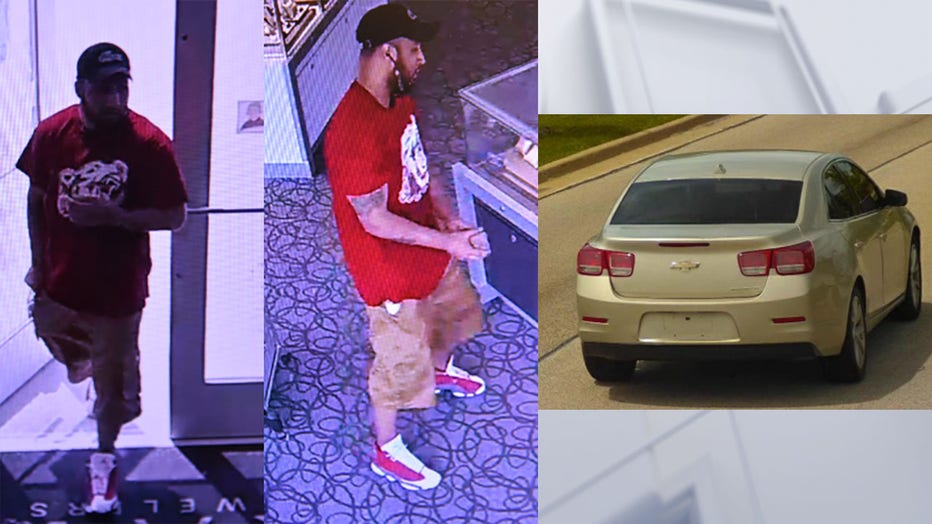 Anyone with information is asked to call Menomonee Falls police at 262-532-8700. To make an anonymous tip, contact Waukesha County Crime Stoppers by calling 1-888-441-5505, through the website or via the P3 phone app.