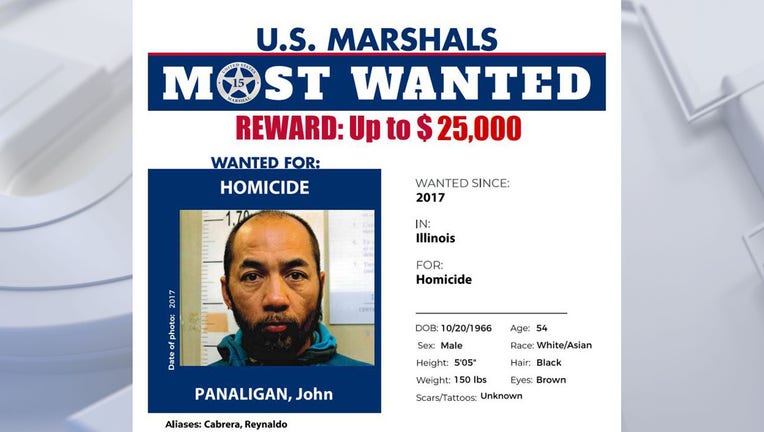 NORTHBROOK, Ill. - A man sought in connection with a suburban Chicago lawyer's 2016 strangulation death has been named one of the U.S. Marshals' most-wanted fugitives.

The Chicago Sun-Times reports there's a $25,000 reward for information leading to the arrest of 54-year-old John Panaligan who authorities allege strangled 36-year-old Victor Jigar Patel in his Northbrook law office in December 2016.

According to U.S. Marshals, at the time of his death, Patel was representing plaintiffs suing Panaligan in civil court.

Panaligan allegedly lured the victim to his law office by scheduling an appointment using an alias.

Authorities believe Panaligan showed up wearing a disguise, which was captured on nearby security cameras and then killed the victim in his office.

Two days later, Panaligan was detained at the Canadian border for allegedly smuggling a firearm into Canada. He was eventually allowed to return to the U.S., where he was interviewed by Northbrook police in relation to Patel’s death. During the investigation, authorities executed multiple search warrants of Panaligan’s belongings and property. Evidence collected eventually gave authorities reason to believe Panaligan was the prime suspect in Patel’s murder.

However, Panaligan fled to Mexico before he could be arrested.

On Feb. 8, 2017, an arrest warrant was issued for Panaligan for first-degree murder for the death of Patel, a husband and father of two.

In 2017, authorities believed he was in the Philippines, where he has family and owns property, but now “could be anywhere," due to his international ties and dual citizenship between the U.S. and the Republic of the Philippines, along with possible assistance from family and friends to elude capture.

Anyone with information should notify the agency at the nearest U.S. Marshals office, the Communications Center at 1-877-WANTED-2, online via the web, or an app at www.usmarshals.gov/tips.