SALT LAKE CITY (AP) - Matthew Butler spent 27 years in the Army, but it took a day in jail to convince him his post-traumatic stress disorder was out of control.

The recently retired Green Beret had already tried antidepressants, therapy and a support dog. But his arrest for punching a hole in his father's wall after his family tried to stage an intervention in Utah made it clear none of it was working.

"I had a nice house, I had a great job, whatever, but I was unable to sleep, had frequent nightmares, crippling anxiety, avoiding crowds," he said. "My life was a wreck."

He eventually found psychedelic drugs, and he says they changed his life. "I was able to finally step way back and go, ‘Oh, I see what’s going on here. I get it now,’" said Butler, now 52. Today his run-ins with police have ended, he’s happily married and reconciled with his parents.

Butler, who lives in the Salt Lake City suburbs, is among military veterans in several U.S. states helping to persuade lawmakers to study psychedelic mushrooms for therapeutic use.

Conservative Utah has become at least the fourth state over the last two years to approve studying the potential medical use of psychedelics, which are still federally illegal. A string of cities have also decriminalized so-called magic mushrooms and an explosion of investment money is flowing into the arena.

Experts say the research is promising for treating conditions ranging from PTSD to quitting smoking, but caution some serious risks remain, especially for those with certain mental health conditions.

Oregon is so far the only state to legalize the therapeutic use of psilocybin, the psychedelic active ingredient in certain mushrooms. But studying them for therapy has made inroads not only in blue states like Hawaii, Connecticut and Maryland, but also GOP-led Texas, Utah and Oklahoma, which passed a study bill through the state House this year. 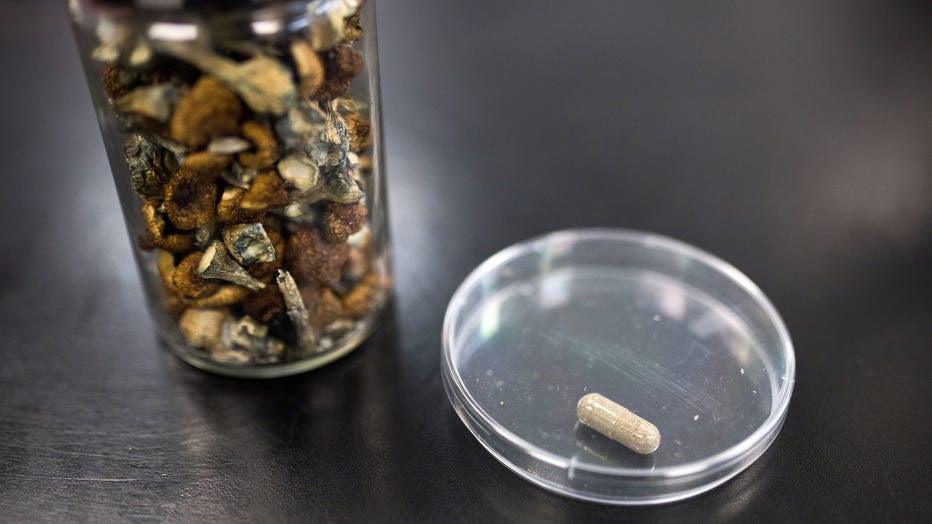 The progress stands in contrast to medical marijuana, which Utah lawmakers refused to allow until a ballot measure helped push it through. However, the proposal to study a broad range of psychedelic drugs passed easily this year.

Texas has yet to legalize medical marijuana, but former Republican Gov. Rick Perry helped shepherd through a bill last year to use $1.4 million to fund a study of psilocybin for treating PTSD.

"The stigma attached to psilocybin and most psychedelics dates back to the 60s and 70s. It’s been very hard for them to overcome," said Democratic Rep. Alex Dominguez, who sponsored the bill. "My approach was, ‘Let’s find the group that all sides claim that they are supportive of.’ And that would be veterans."

He also heard from conservatives like Perry who support the use of psilocybin to treat PTSD — and let advocates from that end of the political spectrum take the lead publicly.

"I don’t envision the VA acting anytime soon," she said. "We’re at a true crisis level and it’s time for the states to step up."

Psilocybin has been decriminalized in nearby Washington, D.C., as well as Denver, which decriminalized it in 2019, followed by Oakland and Santa Cruz in California, Ann Arbor, Michigan, and Cambridge, Massachusetts.

There’s also plenty of venture capital being invested from people who have had positive experiences and are "highly motivated" to invest in psychedelics as treatment, said John Krystal, the chair of psychiatry at Yale University.

Rhode Island lawmakers are weighing a proposal to decriminalize psilocybin this year, and in Colorado there's an effort to get statewide decriminalization on the ballot. But similar measures have stalled in Statehouses elsewhere, including California and Maine.

Studying psychedelics, though, has gained more traction. In Oklahoma, a bill from Republican Reps. Daniel Pae and Logan Phillips would legalize research on psilocybin.

"I believe the research will show that there is a way to use this drug safely and responsibly, and it could save the lives of thousands of Oklahomans," Pae said in a statement. The bill passed the House last month and is now under consideration in the Senate.

It's a stunning turnaround for a field that captivated researchers in the 1950s and 1960s, before mushrooms and LSD became known as recreational drugs. They were federally outlawed during the Nixon administration, sending research to a screeching halt.

New studies, though, have indicated psilocybin could be useful in the treatment of everything from major depression to alcoholism, said Ben Lewis, an assistant professor of psychiatry at the University of Utah Huntsman Mental Health Institute.

"People are referring to this current period of time as the psychedelic Renaissance," he said. Up to 30% of depression sufferers are considered resistant to current treatment, and there have been few recent leaps forward in drug innovation, he added.

The risk of addiction or overdose is considered low with psychedelics, especially under medical supervision, and while some cardiac conditions can present a physical risk, many people's physical reactions aren't dangerous.

But there are serious psychological risks, especially for people with certain forms of mental illness or a family history of conditions like schizophrenia or bipolar disorder.

"Then there’s a possibility that a high-dose psychedelic experience could sort of trigger that and lead to long-lasting mental health issues," said Albert Garcia-Romeu, an assistant professor at Johns Hopkins University School of Medicine.

Classic psychedelics include LSD, mescaline, psilocybin and ayahuasca. Plant-based psychedelics have long been used in indigenous cultures around the world.

RELATED: US teachers being trained in mental health to help students in turmoil

Today, their therapeutic use at Johns Hopkins is carefully monitored, Garcia-Romeu said. Patients are rigorously screened and typically have at least three appointments: one for preparation, a second to take the drugs and a third to work through the psychedelic experience.

For Butler, the 2018 arrest at his parents' home was a turning point. He started researching new ways to deal with the PTSD he has suffered since deploying six times to Iraq and Afghanistan and working in counterterrorism and hostage rescues in Somalia for the U.S. Special Forces before retiring as a lieutenant colonel in 2017.

Eventually he came across ayahuasca, long a part of traditional cultures in South America. Last summer, he took part in a ceremony involving the psychoactive brew, overseen by a woman knowledgeable about its effects. She talked to him as the experience took hold, including a feeling of euphoria, the sight of geometric shapes and a sense he was entering his subconscious.

She spoke to him about his childhood and how the military had shaped his life.

He credits that single session with getting his PTSD about 80% under control, though he occasionally does another if he finds his symptoms returning.

Researchers say they found a way to tell from a person’s blood how severe their depression is, the risk of developing severe depression in the future and the risk of future bipolar disorder.

About two-thirds to three-quarters of people in studies have experienced significant improvements in their symptoms, Garcia-Romeu said. Those are promising results, especially for quitting smoking, where current treatments only work for about one-third of people, he said.

The Food and Drug Administration designated psilocybin a "breakthrough therapy" in 2018, a label that’s designed to speed the development and review of drugs to treat a serious condition. MDMA, often called ecstasy, also has that designation for treatment of PTSD.

How quickly states move from study to wider availability remains to be seen. Connecticut recommended legal medical use only after psilocybin is approved by the FDA, which may take until 2025 or later as the agency works through its process, including risk assessment.

Approval is important to safety as well as access, the Connecticut assessment said — without it, many insurance companies likely wouldn’t cover the treatment, leaving it open only to the wealthy.

In Utah, the study team is expected to complete its work in the fall.

"We’ll see what can and can’t be done," said Republican Rep. Brady Brammer, who sponsored the bill. "If if they feel like it’s safe, it’ll be an interesting ride."