Gabrielle Petito has been missing since late August. She was on a cross-country road trip with her boyfriend.

NEW YORK - Suffolk County Police detectives are investigating the disappearance of a Long Island woman who went missing while traveling across the country with her boyfriend.

Gabby Petito, 22, left New York on a road trip with her boyfriend in a converted camper van in early July to tour National Parks, according to her family, but she disappeared in late August and they haven't heard from her in more than two weeks.

Petito's family reported her missing on September 11 at approximately 6:55 p.m. According to the family, they were last in contact with her during the last week of August.

"We don't eat or sleep," her mother Nichole Schmidt says.  "We're actively looking for her.  I believe a mother's instinct is the most powerful."

Prior to the last communication, Petito is believed to have been in Grand Teton National Park in Wyoming.

Schmidt is concerned about her welfare.

"I don't know if she left Grand Teton or not," Schmidt said. "I did receive a text from her on the 27th and the 30th, but I don't know if it was technically her or not, because it was just a text. I didn't verbally speak to her."

Petito, 22, of Blue Point, is described as a white female, approximately 5 feet 5 inches tall and 110 pounds. She has blonde hair and blue eyes, and several tattoos, including one on her finger and one on her forearm that reads "let it be." The van she was traveling in has been recovered.

"You read stories like this you sympathize and empathize but when you’re in it, it’s an indescribable, horrible, unfathomable experience," her father Joseph Petito said.  "We need to find her.  I'm begging for everyone.

Detectives are asking anyone with information on Petito’s disappearance to contact Crime Stoppers at 1-800-220-TIPS. Police say that all calls can remain anonymous.

The white van has been recovered at the home of her boyfriend's parents.

A spokesperson for the Jackson Police Department said that an "attempt to locate" call was recently filed for Petito.

Petito was also documenting the journey on Instagram.  Her profile said:  "Along for the ride" and "traveling the world in our tiny van".  Her last post was two weeks ago.

A family friend has started a GoFundMe to raise money to help in the search for Gabby Petito.  The page calls her disappearance suspicious.

Petito's boyfriend could not immediately be reached for comment.  Newsday reported that he has returned to Florida and has hired a lawyer.

Anyone with information is asked to call Crime Stoppers.  That number is 800-220-TIPS.

'How could you do this to Gabby?' Petito family lashes out against Brian Laundrie

Boyfriend 'refusing to tell Gabby's family where he last saw her' 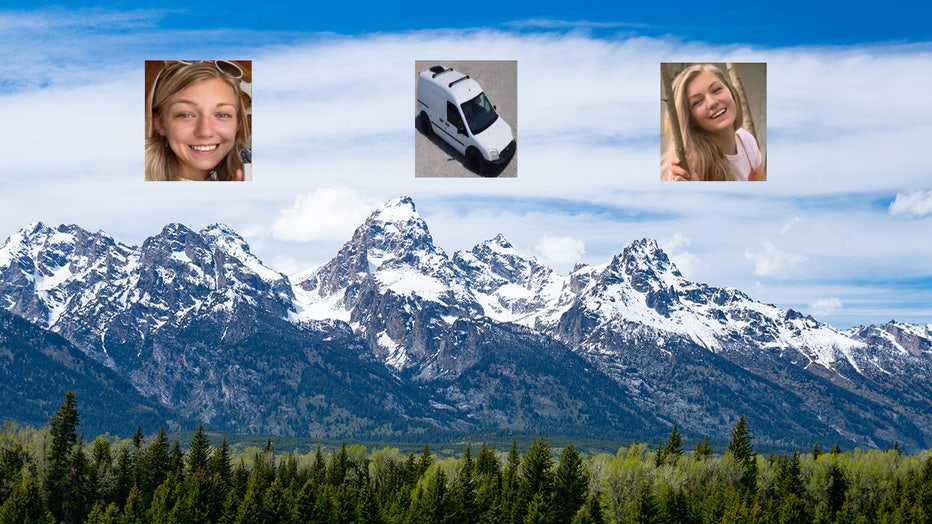 Pictures of Gabrielle Petito and her van are shown over a view of the Grand Tetons.(Photo by AaronP/Bauer-Griffin/GC Images)