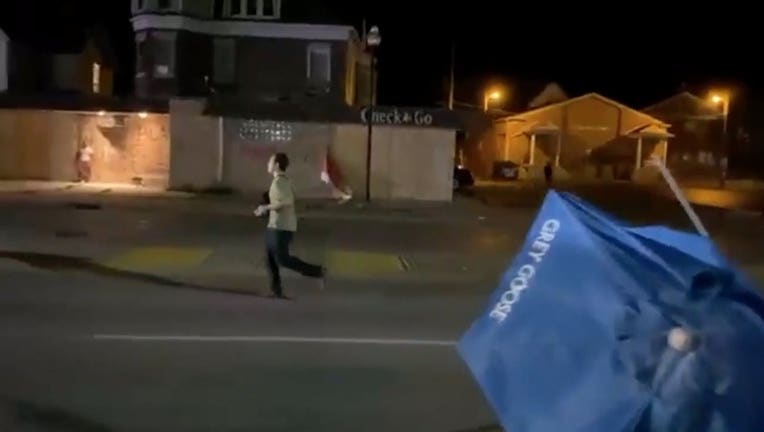 KENOSHA, Wis. - A timeline of key events before and after Kyle Rittenhouse shot three people during a night of unrest in Kenosha, Wisconsin, last year:

Aug. 23, 2020 — An officer responding to a reported domestic disturbance shoots Jacob Blake, a Black man, seven times in the back as Blake was leaning into his vehicle. Bystander video captures the shooting, which left Blake partly paralyzed. Neighbors march to the Kenosha County Public Safety Building, where they face officers in riot gear.

Aug. 24 — Police fire tear gas at hundreds of protesters who defied a curfew, threw bottles and shot fireworks at the courthouse. Crowds destroy dozens of buildings and set more than 30 fires. Gov. Tony Evers calls in the National Guard. The man who shot cellphone video of Blake's shooting says he saw Blake scuffling with officers and officers shouting "Drop the knife!," but that said he didn’t see a knife in Blake’s hands.

Aug. 25 — Blake’s lawyer says Blake is paralyzed from the waist down. Blake’s family calls for calm. Calls go out on social media, including on a page run by the "Kenosha Guard," for people to "take up arms" and help defend the city from "thugs." Demonstrations are held for a third night, with gunshots heard and people seen carrying long guns and other weapons. Shortly before midnight, two people — Joseph Rosenbaum, 36, and Anthony Huber, 26 — are shot dead and a third, Gaige Grosskreutz, 26, is wounded.

Aug. 26 — Authorities say they are seeking a possible vigilante seen on cellphone video opening fire with a rifle. Police in Illinois announce the arrest of 17-year-old Kyle Rittenhouse, of Antioch, which is about 15 miles (24 kilometers) from Kenosha.

Aug. 27 — Rittenhouse is charged with multiple counts, including homicide and attempted homicide.

Aug. 31 — At a news conference the day before he visited Kenosha, President Donald Trump is asked if he condemned Rittenhouse’s actions. He says: "You saw the same tape as I saw. And he was trying to get away from them, I guess; it looks like. And he fell, and then they very violently attacked him. And it was something that we’re looking at right now and it’s under investigation. But I guess he was in very big trouble. He would have been — I — he probably would have been killed."

Sept. 1 — Trump visits Kenosha and blames "domestic terror" for the violence. He makes no mention of Blake’s shooting by police and calls the violent protests "anti-American."

Sept. 3 — Joe Biden, the Democrat running against Trump, visits Kenosha. He meets with Blake’s family members, speaks with Blake by phone and leads a community discussion.

Sept. 24 — In a TV appearance and social media posts, Rittenhouse’s attorneys say his client acted in self-defense but was also a courageous defender of liberty and a patriot who exercised his right to bear arms amid rioting. They claim Rittenhouse is being sacrificed by politicians who want to strip citizens of the right to defend their communities.

Sept. 25 — At a hearing in Illinois, Rittenhouse's attorneys ask for more time to fight his extradition to Wisconsin. They later say in documents that sending Rittenhouse to Wisconsin would "turn him over to the mob."

Nov. 2 — A Wisconsin court sets Rittenhouse’s bail at $2 million. Conservative groups have been raising funds for Rittenhouse, who easily amasses enough for bail.

Nov. 20 — Rittenhouse posts bail and is released. Hours later, one of his attorneys tweets a picture of Rittenhouse with actor Ricky Schroder, who the attorney says donated to Rittenhouse.

Jan. 5, 2021 — A Wisconsin prosecutor declines to charge Kenosha Officer Rusten Sheskey, who is white, in Blake’s shooting, ruling that Blake had a knife and the officer had a reasonable self-defense claim. Subdued protests follow.

The Walworth County Sheriff's Office is investigating a fight that led to a stabbing at the Vegas Club on Highway 14 in the Town of Darien.