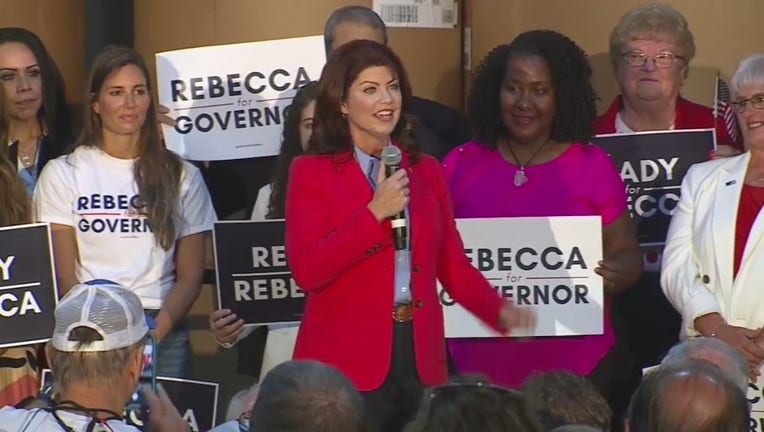 MADISON, Wis. - Former Lt. Gov. Rebecca Kleefisch downplayed threats against school board members, saying recently that she would "love" for those targeted with anger during the pandemic to have experienced what she and former Gov. Scott Walker did during the Act 10 union protests a decade ago.

Kleefisch, a Republican running for governor in 2022, has spoken out against violence targeting people in office. But she walked a fine line when speaking at an Oct. 11 "Pints and Politics" event organized by the Kenosha County Republican Party.

Kleefisch referenced a letter from the National Association of School Boards asking President Joe Biden for federal assistance to investigate and stop threats made over policies including mask mandates. The association, which represents school board members, likened the vitriol to a form of domestic terrorism. The letter cited a meeting in Onalaska, Wisconsin, that was postponed after anti-mask protesters stormed it.

She also referenced the large protests that targeted Walker when she was his lieutenant governor in 2011 after he proposed effectively ending collective bargaining rights for most public workers. Both she and Walker received death threats and were targeted for recall elections in 2012, which they won.

"I would love for these folks to have gone through what Gov. Scott Walker and I went through during the recalls: The vuvuzelas and the drums, and the death threats, and the people who were showering inside the public restrooms, sleeping two-by-two in sleeping bags, banging on cars, threatening my children, spreading lies and intimidating us," Kleefisch said in audio obtained by the liberal advocacy group American Bridge 21st Century and provided to The Associated Press on Wednesday. "Imagine if school board members felt something like that. Instead, all they feel is the pressure of their actual constituents asking them to do their job." 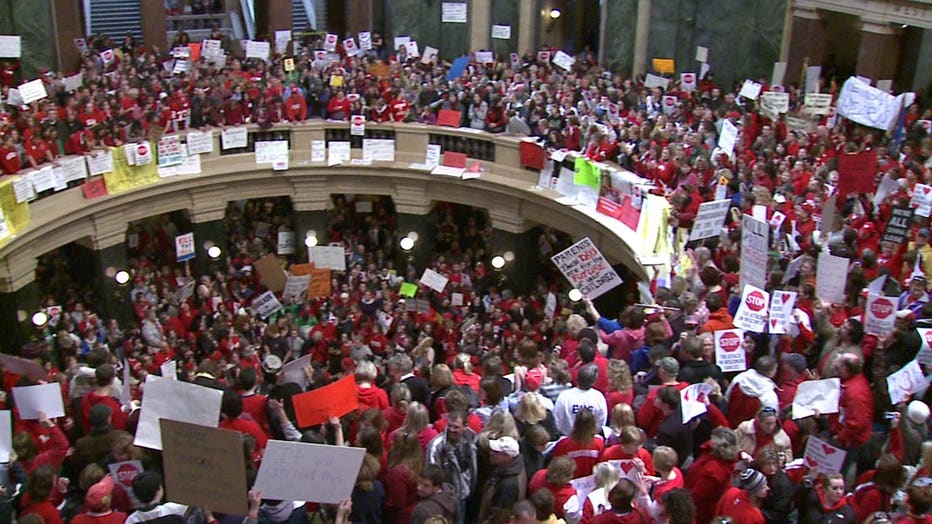 Protest over Act 10 at Capitol in Madison

In a column Kleefisch wrote four days before those comments, she spoke out more clearly against violence targeting school board members.

"Let’s be clear: violence to achieve political ends in America is wrong," she wrote. "I myself have faced the screams of protestors threatening violence when the Walker-Kleefisch Administration and the Republican Legislature passed our Act 10 reforms in 2011. I didn’t notice outrage from the Left then."

She also faulted liberals for not speaking up when members of the Waukesha School Board were threatened and harassed this summer after voting to opt out of the federal free meals for all program. The board later reversed itself in the face of heavy criticism.

School board members are largely unpaid volunteers, parents and former educators who step forward to shape school policy, choose a superintendent and review the budget. But they have been frightened by how their jobs have suddenly become a culture war battleground. The climate has led a growing number to resign or decide not to seek reelection.

Kleefisch and her supporters have been involved with an attempted recall of four school board members in Mequon-Thiensville School District that is on the ballot Tuesday. Leaders of the recall drive have said they are targeting the board members because of COVID-19 restrictions, declining test scores and their desire prevent critical race theory from being taught.

One of the candidates running to replace a current board member, Scarlett Johnson, is a member of Kleefisch’s grassroots leadership board. Kleefisch has taken to Facebook to boast about volunteers from her gubernatorial campaign assisting with the recall effort.

Kleefisch is seeking to replace Democratic Gov. Tony Evers, a former state school superintendent who spent his career in education prior to running for office. Former Marine Kevin Nicholson and state Rep. John Macco are also considering runs for governor as Republicans, and former President Donald Trump has encouraged retired U.S. Rep. Sean Duffy to run even though he lives in New Jersey.

"No one in Wisconsin should be encouraging violence of any kind, much less a candidate for governor," he said.

Kleefisch's spokesman, Alec Zimmerman, emailed a statement in reaction that suggesting Kleefisch is encouraging violence against school board members "is as big of a lie as when the Left labeled concerned parents domestic terrorists."

A principal and two teachers suddenly resigned from a Wauwatosa elementary school in one week, but school staffing is not just an issue in Wauwatosa.